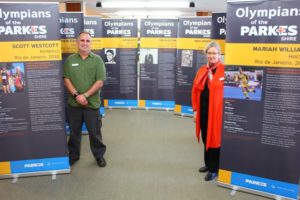 Parkes Shire Council is celebrating the Olympics, hosting a banner display to showcase the Shire’s home-grown Olympic heroes. This year we have two local athletes representing Australia in the 2016 Summer Games in Rio de Janeiro, Brazil. Mariah Williams (21 years), a former student of Middleton Public School and Parkes High School, competed in her first Olympics with the Hockeyroos. Not only is Mariah one of the youngest on the squad, but she has undergone surgery on both knees. Even though the Hockeyroos didn’t win the gold, Mariah has proved she is a champion.

This year 40-year-old father of three, Scott Westcott has gone from the Northparkes Rotary Fun Run all the way to Rio. Scott spent his childhood running around the family farm in Alectown, and is a former student of Parkes East Primary School and Parkes High School. Although he has put quite a few miles behind him in his marathon career, the 2016 games is his Olympic debut.

Their stories are just two of those featured on the banners in the Parkes Library. Dan Fredericks, the Parkes Library’s Local and Family History Researcher, turned his attention to our Shire’s impressive history of Olympic representation, researching our eight champions to create the Shire’s Olympians display. Our local Olympic history goes back some 64 years; Rex Aubrey was the first Parkes local to represent Australia, making a splash in the 1952 Summer Games in Helsinki, Finland. Nira Windeatt became the first female Olympian from the Parkes Shire when she qualified for the 1976 Games in Montreal, Canada.

The banners provide a glimpse into the athletes’ backgrounds and achievements and Dan hopes that other Parkes Shire residents will be inspired by their accomplishments and sacrifices, which are also detailed in an online blog, www.historyparkes.org.

You can come and see the display at the Parkes Library, where the banners will be for the remainder of the games. If you can’t make it in to Parkes, don’t worry. After the Olympics Games has finished, the display will travel to other locations around the Parkes Shire.