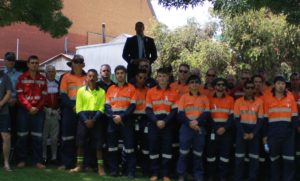 “I will stand up, speak out, and act to prevent men’s violence against women.” Thisis the oath that dozens of Parkes Shire men took during the White Ribbon March last Friday. Parkes’ second White Ribbon event was attended by more than 100 locals, who marched from the new Parkes Arbor to Cooke Park to raise awareness of men’s violence against women.

The guest speakers included Cr Bill Jayett, former Senator and Olympic gold medalist Nova Peris, and IPROWD founder Peter Gibbs. The speakers shared heart-wrenching personal testimonies and confronting statistics with the crowd. Each year an average of one woman is murdered each week by a current or ex-partner, and the Parkes
Shire rates 17th in the state for incidents of domestic violence. While the statistics are sobering, the event was a celebration of positive change, with a free sausage sizzle, snow cones, a jumping castle, and live entertainment by
Orange-based musician Jacob Sutherland.

Nova said that while most men were not perpetrators of abuse, the vast majority of domestic abuse was committed by men. “We need men to be part of the solution,” she said. Stephanie Loader, Managing Director of Northparkes Mines, announced that Northparkes have become the first White Ribbon accredited mine in the country. “We have
an opportunity to influence culture,” she said.

Peter Gibbs’ revealed how the death of his sister inspired him to establish IPROWD, an organization that helps indigenous students join the police force. “Don’t be at the back of the room. Don’t be bystanders,” he urged the crowd, “men need to stand up against violence”.

If you or someone you know are in immediate danger, dial 000. To access support contact: 1800RESPECT or 1800 737 732 for domestic violence and/or sexual assault. Mensline Australia 1300 789 978 for men dealing with family and relationship difficulties.