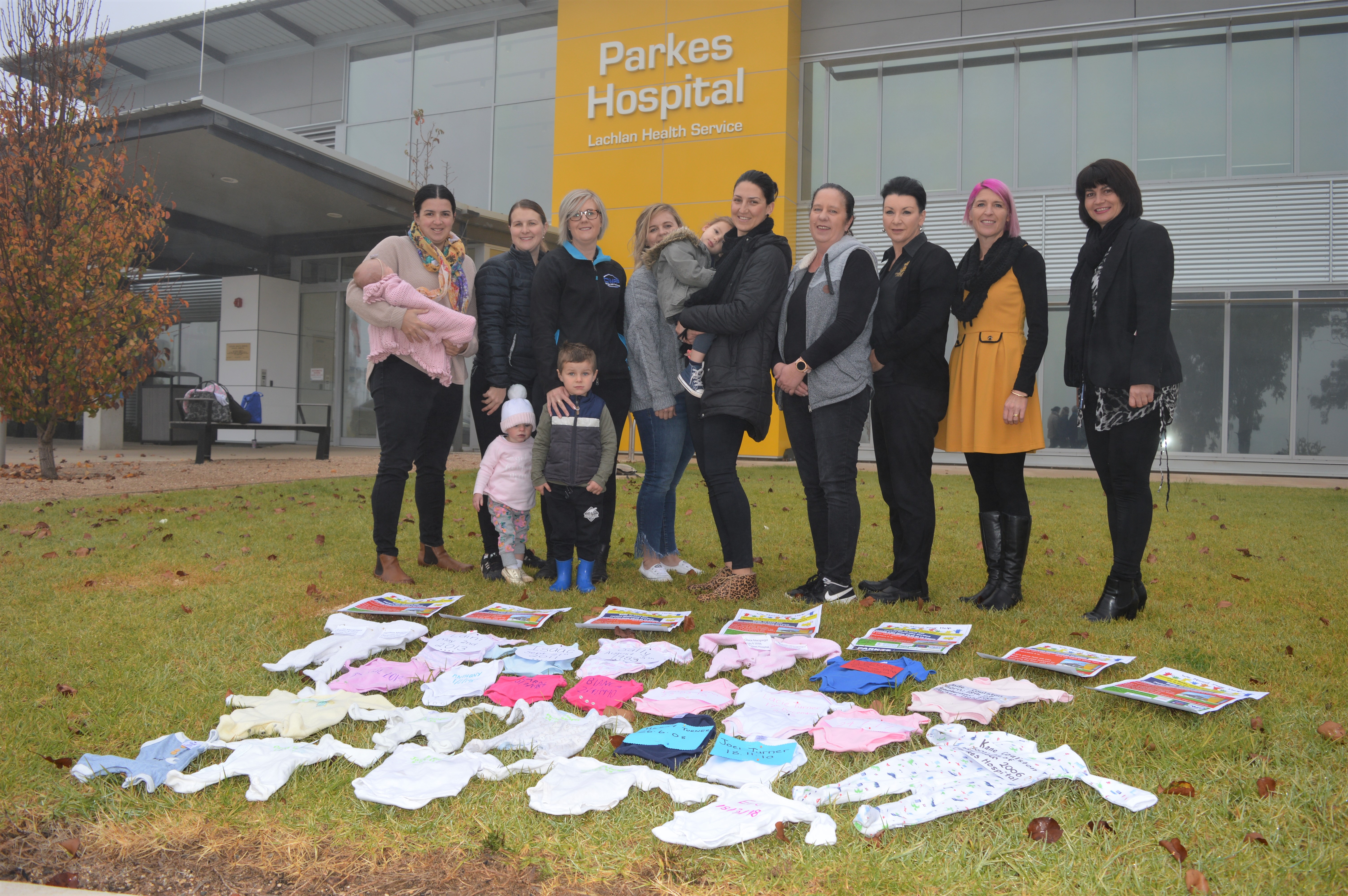 The Parkes community is called on to rise up today for a rally at the Hospital at 12:30pm to stop the downgrading of maternity services.

The Parkes Hospital has been in the news all week after a decision to temporarily close the maternity service due to an alleged shortage of medical proceduralists.

Residents can also sign a petition of the NSW Nurses and Midwives Union at the rally and at local businesses to get to 10,000 signatures to present it to Parliament.

On Tuesday the Parkes Chamber of Commerce stepped forward in support to organise a ‘field of babies’ for the rally. “We, as the business community, want to show our support for keeping the Parkes Maternity Ward open by decorating the lawn with named baby outfits. We live and work in Parkes and want to ensure that children continue to be born in our wonderful Shire.”

According the Parkes Chamber of Commerce President Geoff Rice “It is just devastating to lose such a basic necessity. We are trying to entice families to our town, but if you can’t offer them such a basic service, they might reconsider.” Geoff encouraged all residents and business owners to attend today’s rally to support the cause.

Parkes Shire Mayor, Councillor Ken Keith OAM also expressed alarm and frustration over the decision and said: “It is exasperating that the situation has reached a crisis point. This dilemma has long been foreseen, as our long serving proceduralist neared retirement and should have been proactively planned and managed by Western NSW Local Health District.

“With the Special Activation Precinct, construction of Inland Rail and other major developments, our region is experiencing unprecedented growth,” said the Mayor. “This decision seems to be contradictory to the growth that Parkes is experiencing and defies belief.”

Member for Orange Phil Donato reacted to ‘the genuine concern brewing in Parkes and Forbes’ on his Facebook page saying: “I want to reassure the communities of Forbes and Parkes that I will be working feverishly to get to the bottom of this.”

On Tuesday he delivered a notice of motion in the Legislative Assembly that he would move the house to demand that the Government immediately restore maternity services and maintain level 3 birthing at the Parkes Hospital, and he would call on the Government to urgently source and locate obstetric and anaesthetic services to Parkes Hospital, and implement contingency and succession planning for future resignations or retirement of medical practitioners.

The Western NSW Local Health District released a statement saying there is a shortage of medical practitioners to support maternity services at both Parkes and Forbes. “The WNSWLHD is working hard to find ways to attract doctors to our communities.

It is the intention to continue to provide birthing services at both Parkes and Forbes.”

“To maintain safe maternity services the right medical, nursing and midwifery staff need to be available; there must be sufficient numbers of births to maintain skills and experience,” said a spokesperson for the Western NSW Local Health District.

By Maggi Barnard and Beth Thomas