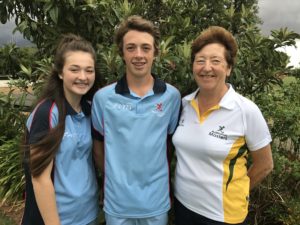 Parkes hockey celebrated this week with the announcement of two NSW junior representatives and to top it off an Australian masters representative. Koby Johnstone was selected for the NSW U15 state boys team and Gracey Jones for the NSW U15 Blues girls team. Koby, as a midfielder, and Gracey, as a goalkeeper, will both play in the U15 Australian National Championships in Moorebank from 5th to 13th April. The two promising 14-yearold players impressed the NSW selectors across three trial weekends held twice in Newcastle and once in Bathurst. They also
took part in the Hockey NSW Centre of Development program during the off season.

Gracey’s week became even more special when her grandmother, Maureen Massey, was named in the Australian O60’s women’s team – as a goalkeeper! It is extremely rare for a grandmother and granddaughter to play the same competitive sport, both as goalkeepers. To be selected in high-level representative teams in the same week is outstanding.

Maureen’s team will tour the UK in June competing in the Home Championships in Dublin, Ireland, as well as various international matches in Wales and England. Maureen will be representing Australia in master’s hockey for the fifth time. Hockey also seems to be in Koby’s genes as his grandfather, Noel Johnstone recently represented Australia in Masters hockey in the O65’s and O70’s divisions. Noel played in the Australian O70’s men’s team at the
Masters World Cup in Newcastle last year, as well as World Cups in South Africa and London previously.

By Cherie and Glenn Johnstone