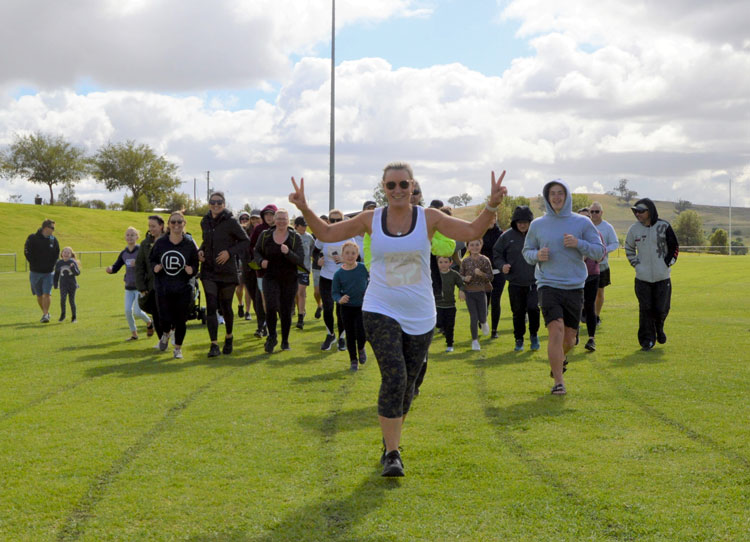 RUN REBECCA RUN… Rebecca Miller started her epic challenge at Northparkes Oval in April with many members of the Parkes community joining in. While she was running alone most of the time, she received good support from all the communities along the way. (Photo: Christine Little)

It took one woman to run nine marathons on nine consecutive days and almost 400 supporters to raise over $100,000 for four charities to help terminally ill children and their families.

A month after completing this titanic challenge, Parkes business woman Rebecca Miller is still hurting from the physical exertion, but she is also glowing from the ripple effect of the kindness bestowed on her from so many people.

“It is an amazing feeling,” she said this week after her fundraising page had gone beyond the 100k target by over $4,000.

“It is the hardest thing I’ve ever done in my life and every single muscle in my body was hurting, but there were so many magical moments and the money raised for the charities will be life changing.”

Rebecca called her challenge The Ripple of Kindness Project and said the compassion shown by all her supporters were just phenomenal. “From our clients who came in with an envelope with $20 inside, the kids who donated all their savings, to the business group I am part of who boosted the effort with a massive $42,000 in one go last week.”

Rebecca was motivated to chase a big target after she raised $25,000 in 2017 shaving her head. “I’ve always liked a big challenge and decided to shoot for the stars, and if I was to land in the clouds it would not matter.” She described reaching the target as one of the biggest highlights of her life, and praised the love, support and countless messages that kept coming from all corners.

There were some pretty low moments too during her nine-day challenge, especially days three and five. “I knew I was mentally very strong, but my body was suffering.” Rebecca described how she had to dig very deep on these days doing a lot of self-talk. “I kept on reminding myself how I was just running and my situation was nothing compared to what sick children were experiencing.”

It was children like little Lilly Wyburn from Parkes who kept her going. Rebecca dedicated her run to Lily, who fought Leukaemia from the age of two and sadly lost her battle in November 2017 when she was eight and a half years old.

As leukaemia and brain cancer in kids are the most common childhood cancers, she raised funds for four cancer-related foundations: Bandage Bear Foundation, Carrie’s Beanies for Brain Cancer, Leukaemia Foundation and Parkes CanAssist.

Rebecca said the four charities were blown away. “They were following my journey very closely and was super excited greeting me at Westmead Hospital at the end.”

The Ripple of Kindness Project page will still be open to donations for another week at https://au.gofundme.com/f/the-ripple-of-kindness-project