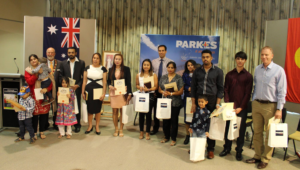 Fourteen new citizens pledged their loyalty to Australia and its people on Tuesday, making it the largest Citizenship Ceremony to be held by the Parkes Shire Council.

Mayor Ken Keith welcomed the new Australians, who have come from all over the globe. The new citizens have come from as far away as Scotland, Iran, Pakistan, India, Thailand, and the Philippines, with one from neighbouring New Zealand.

Our newest citizens have already called Australia home for at least five years, al- though former Scotsman James Murray boasts the longest residency – he has lived here for 29 years. James came to Australia from Scotland in 1988, and has lived in Parkes since 1993. James is the Regional NSW Manager with Linfox Logistics.

Former Kiwi Daniel Klaas Kroot is another long-term Parkes resident who decided to make it official. Daniel came to Australia from New Zealand in July 2000, and has been living in Parkes since 2001. Daniel works as a warehouse team member with Containit Solutions.

Felipa Prado Unger arrived in Australia from Philippines in July 2011 and settled in Parkes straight away with her husband Donald.

Rupa Abhishek Dupe came to Australia from India with her husband and two daughters in October 2011 and settled in Parkes straight away. Mrs Dupe is a Placement Consultant with Joblink Plus.

Anoop Nair arrived in Australia from India in November 2005, and his wife Lakshmi Balachandran arrived on Christmas Day in 2009. They relocated to Trundle in March 2013. Anoop is a Retail Assistant. Lakshmi is a Registered Nurse. They have two children including Maadhav, who also received Australian citizenship.

Muhammad Akmal arrived in Australia from Pakistan in July 2011 and his wife Ammara joined him in September 2011. They moved to Parkes in November 2013. Muhammad works as a Procurement Officer with Northparkes Mines. Ammara looks after their three children; Hareem and Muhammad Arham, also became Australian citizens on Tuesday.

Mohammadebrahim Emamjomeh, who is known as Abraham, came to Australia from Iran in April 2012. He moved to Parkes in March 2016 and works as a Civil Engineer with John Holland. He is married with a two year-old son.

Hathaya Nongkhu arrived in Australia from Thailand in 1996. She relocated to Parkes in 2016. She is engaged and works at the RMS as a Project Contract Officer.

Maribeth Loberanes Wagner arrived in Australia from Philippines in June 2012 be- fore relocating to Parkes. She is a cook at Chong Hing Restaurant in Parkes and enjoys cooking for her husband.