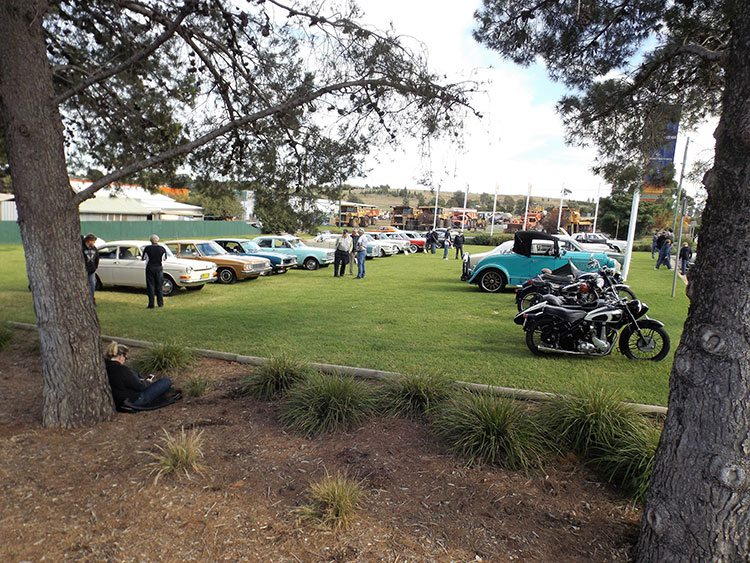 The display of heritage motor vehicles at last year’s event.

The Parkes Antique Motor Club is playing its part this Sunday (16th May) to display heritage motor vehicles in celebration of Australia’s National Motoring Heritage Day.

The club will have a display of motors on the lawns of the Henry Parkes Centre from 10am to 3pm with clubs from Orange, Dubbo and Condobolin joining in. Members will be on hand to talk about their particular vehicles, Australia’s motoring heritage, and the pleasures of belonging to a heritage motoring club.

The club will also have a project on display to showcase skills involved in vehicle restoration, while there will be free entry to the Elvis display and the Parkes Motor Museum.

National Motoring Heritage Day is celebrated on the third Sunday in May each year. “It is a recognition of the significant role that motoring has played in the development of Australia, and an opportunity to showcase some of the achievements the industry has made over more than a century,” said Barry Garment of the Parkes Antique Motor Club.

“The day’s objective is to have as many heritage motor vehicles on the road or on display across the country as possible.”

Although motor vehicles were imported into Australia from the beginning of the 20th Century, motor body building did not begin as a significant industry until 1917. “This was only due to a government-imposed restriction on imported vehicles resulting from Australia’s commitment to the Great War,” said Barry.

From 1917 until after World War 2, the industry was required to import only one complete car to each two chassis. Large scale motor body production commenced in 1917 when Cheney’s Motors of Adelaide contracted Holdens to provide 5,000 bodies for Dodge and Buick Chassis.

By 1938, the number of complete cars imported into Australia was negligible. In 1928, Holdens Motor Body Builders produced almost 35,000 bodies for a wide range of cars, The Australian content of a 1928 Chevrolet Tourer was 65%, whilst that of the last “Australian” Commodore less than 50%.