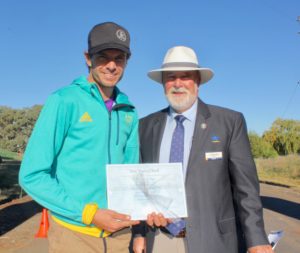 Olympian marathon athlete Scott Westcott received a big surprise on Sunday morning when Mayor Ken Keith presented him with a Star of Parkes at the start of the Fun Run.

Scott, who ran in last year’s marathon at the Olympic Games, said he was overwhelmed and speechless by the gesture. “I did not even know you could name stars after people.”

The Mayor handed Scott his Star Name Deed certificate stating the star’s exact astronomically verified position. The Star of Parkes is a symbolic honour, inspired by the tradition of presenting the Key to the City.

The stars are reflective of the Parkes Shire –our starry skies, the iconic CSIRO Radio Telescope and the Shire’s shining future.

Scott, who grew up in the Shire and regularly returns for the Fun Run, waited more than 20 years to claim his place on an Australian OIympic team.