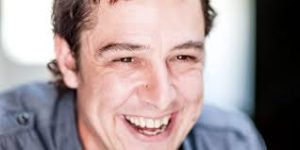 Australian actor, radio presenter, voiceover artist and philanthropist Samuel Johnson will be the celebrity speaker at a gala dinner on 19th October at the Forbes Services Club.

Samuel raised thousands of dollars for CanTeen in 2003 when he rode over 1,000km on his unicycle from Sydney to
Melbourne. In 2013 he set a new Guiness World Record when he went right around Australia on his unicycle. He also raised $2 million for cancer research and assisted his sister Connie to spread awareness of breast cancer.