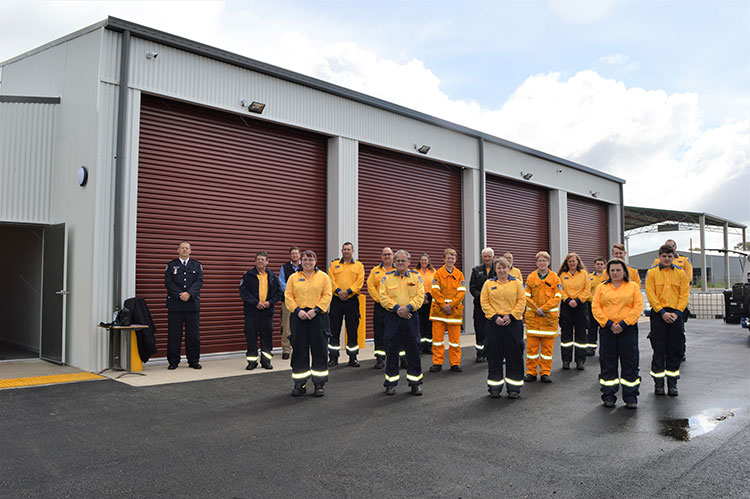 READY TO SERVE… Members of the RFS Parkes Headquarters Brigade outside the new $870,000 fire station in Hanlon Street. The brigade has outgrown the old station in Mathews Street where they were for about 20 years.

It was almost literally a day of fire and ice last Saturday when the Parkes Brigade of the NSW Rural Fire Service (RFS) celebrated the opening of their new brigade station on a freezing cold day.

The ceremony marked a big week for firefighters in Parkes, as the new Parkes Fire Station in Hill Street was officially opened only four days earlier.

“We are delighted with the outcome of this building to serve our community,” said Parkes Shire Mayor Ken Keith OAM. He said the Parkes Headquarters brigade was a very good supplement to the rural brigades where numbers had been dropping over recent years as a result of much bigger farms.

He said the cadet program with the Parkes High School, initiated by Terry Job 15 years ago, played an important role in ensuring a constant flow of new recruits for the RFS.

Sam Farraway MLC joined NSW RFS Assistant Commissioner Peter McKechnie at the ceremony saying the $870,000 new station will further help members of the Parkes Brigade assist with training and the fighting of fires locally, providing enhanced support to volunteers as well as the communities they protect.

The new station, with four vehicle bays, an office, training and store room, kitchen and bathroom facilities, was part funded by the State Government, Parkes Shire Council and by fundraising efforts from brigade members.

Work on the station took about two years to complete and the brigade moved in earlier this month.

Two of the younger members of the brigade were very happy with the new facility. “We’ve come so far,” said Connor Trueber. “We now have what we need and it will be good to do training here,” said Brayden Varcoe.

Sam Farraway and Assistant Commissioner Peter McKechnie both praised the efforts of the RFS crew members. “Volunteers are a special breed of people. They are selfless, brave and really generous with their time and skills.”

“We continually see how hard our skilled firefighters and support crews work to keep us safe when bush fires and emergency situations threaten and I offer my sincere thanks and gratitude to all the NSW RFS members for their outstanding efforts,” Sam said.

Peter told the 54 members of the Parkes brigade they could give themselves a pat on the back as members of the public had so much respect for what they do. “I also thank the family, friends, employers and colleagues of these and all volunteers. We know it takes their support and patience to help Rural Fire Service volunteers do what they do.”

The Parkes Headquarters Brigade was formed in the late 1990s and is one of 98 brigades in the Mid Lachlan Valley Team with a total membership of 3,011. The Parkes brigade attends an average of 50 incident calls per year. It is also the primary back-up to Fire & Rescue NSW Parkes.

During the 2019-20 fire season Parkes crews have attended a number of fire grounds including the Sir Ivan Fire, as well as helping at the Lismore floods.

The occasion last Saturday was also used to honour members for a total of 330 years of service with 13 recipients receiving medals and one posthumous medal awarded. The long service medals ranged from 10 to 61 years of service. 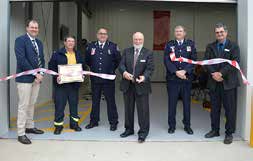