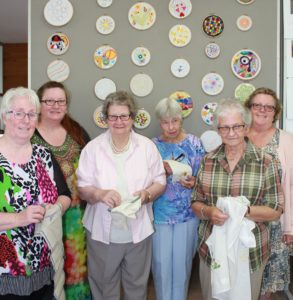 Some nice threads are on display at the Parkes Shire Library during November, with a discrete yet impressive exhibition of embroidery. The works are on tour from the 2015 Sydney Quilt and Craft Fair at Glebe Island, and were selected from entries around NSW. The main criterion for the works was they had to be sewn onto a white background, and they had to be the artist’s original design.

The impressive artworks represent many hours of needlework, and a closer inspection reveals the talent and skill behind the creations. Some embroiderers used a combination of stitches to create texture and dimensionality, which literally brings the design out of the fabric; a couple of ingenious stitch-work techniques were used to create three-dimensional coral reef scapes. Others used colour and design to create an image; even a simple straight stitch made some pretty pictures.

The display also includes work from the Parkes’ Embroiderer’s Guild, as well as some of their tools of trade. The Parkes Embroiderer’s Guild group meet twice a month and enjoy adding a social element to their handicraft. There is a wide range of skills within the group, and a lot of knowledge sharing. The Guild members all agree that while embroidery teaches patience and is usually calming, it can be frustrating.

The Parkes Embroiderers’ Guild Display will be at the Parkes Shire Library until Wednesday, 30th November.