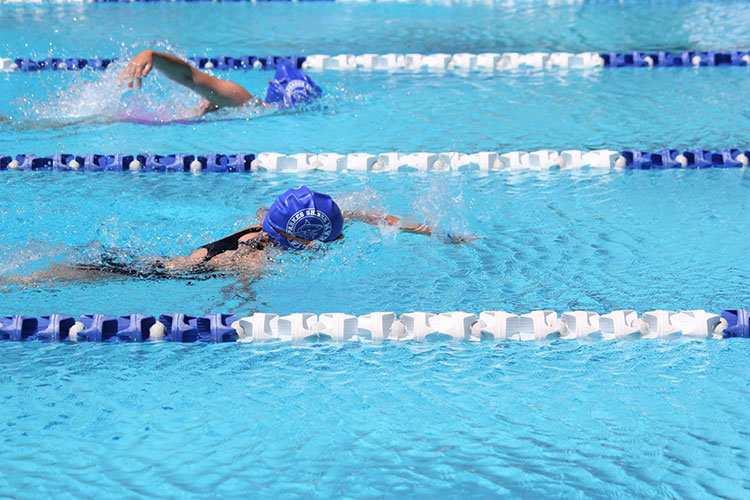 Not even a dusty weekend could stop the Parkes Sharks from hosting a very successful swimming carnival last weekend.

With over 230 swimmers coming to Parkes, the grounds of the pool were very well stacked with parents and officials too, some of whom travelled from Penrith for the event. A total of 23 clubs competed with Kinross Wolaroi, Mudgee Indoor and Forbes Fins the better represented clubs, while a contingent of 83 Parkes members competed.

During the 1,500m event a dust storm progressed across the pool, and in something akin to a surrealist painting, swimmers were surrounded by blue agitated water, and framed by water tinted with orange dust.

Sunday started early with warm-ups from 8am, followed by 7.5 hours of swimming. If it’s not dust, it’s a power failure in the starting mechanism, but quick thinking by volunteers got swimming back on track with mini- mal time lost.

One of Parkes’ most successful swimmers was Khan Jackson, who with plenty of training over the past months managed to secure three seconds and a third out of seven events.

A popular result amongst the Parkes crowd was 7-year old Connie Fryer claiming first in the 25m back stroke.

From amongst the visitors, 13-year-old Francesca Chitukudza representing Kinross Wolaroi placed first in nine of the 15 events she competed in, and second in the others. Her older sister Felicity came first in six events, and their brother Francis was second in six events.

Jameson McGeachie (8) from Mudgee, won five of the six events he entered over 50 and 100m. Tyler Johnson (14) also swam well for the Bathurst club, achieving first or second in all his events.

Many Parkes officials received training at the carnival to enable the club to host a successful carnival on its own in the near future.

The army of volunteers before and after swimming on each day helping to set up and man various positions are to be commended for their efforts. Thanks also to Parkes Shire Council for the wonderful presentation of the pool for the other towns to enjoy.