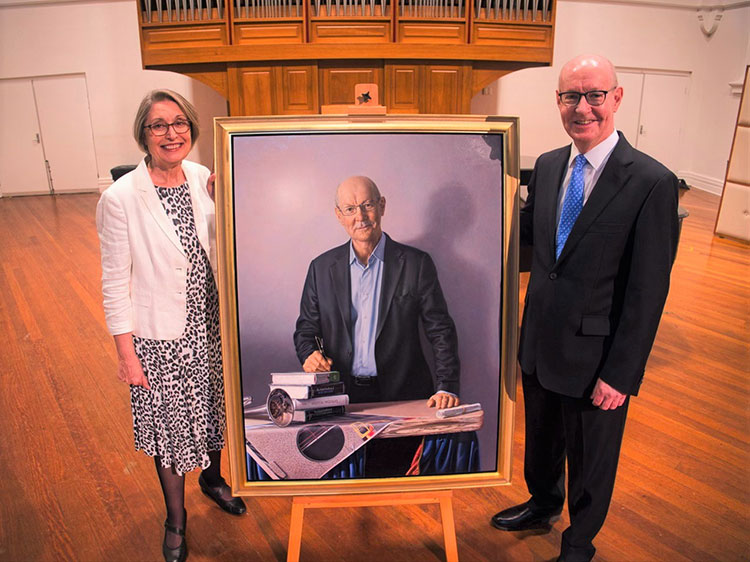 Gary McPherson and his wife Roslyn of 45 years at the unveiling of his portrait in late 2019 as the eight Ormond Chair of Music, which is now hung in the Melba Hall at the University of Melbourne.

A former Parkes resident received a singular honour last month becoming only the third musician to be awarded an honorary doctorate from one of the oldest and most prestigious universities in Europe.

Gary McPherson received an Artium Doctorem Honoris Causa from Lund University in Sweden based on his international reputation as a leading researcher and music educator. Gary is regarded as a great inspirer with a long and multidisciplinary inter-national career.

He watched the formal ceremony via a live stream on Friday, 15th May from the Lund Cathedral (ca 1145) with the ceremony conducted in Latin. Established in 1666 Lund University has only awarded the honour to musicians on two previous occasions: 2010 to George Martin, Beatles producer; and in 2015 to Nina Stemme, Swedish dramatic soprano.

Gary is the brother of Cheryl Thompson and Dennis McPherson from Parkes, Roslyn Dean now living in Brisbane, and the son of George and Lorna McPherson of Close Street Parkes (now deceased).

Gary was born and bred in Parkes and played in the Parkes Shire Concert Band. He won various regional, state and national awards on the soprano cornet, and went on to study and gain academic qualifications from the Sydney Conservatorium of Music, Indiana University, Trinity College (London) and the University of Sydney.

Gary performed professionally on the trumpet for many years and has had a long, illustrious career as an academic with well over 250 publications including 12 edited or authored books for Oxford University Press. He has also held professorial positions at major universities in Australia, Hong Kong and the United States, and during the last 12 years, the Ormond Chair of Music at the University of Melbourne where he served for 10 years as the Director of the Conservatorium.

During the ceremony Gary was bestowed with the insignia; a hat, gold ring and diploma. The doctor’s hat symbolises freedom and power and is covered with black, pleated fabric. The ring is made of gold and symbolises loyalty to science. The diploma (in Latin) is the written confirmation of the rights awarded to honorary doctors.