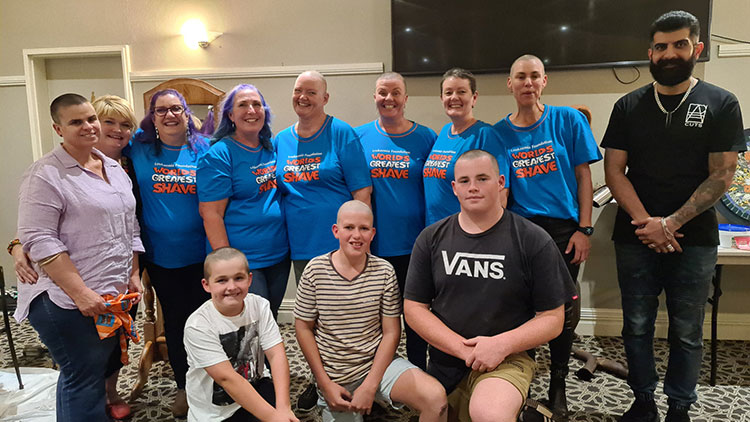 The Funky Crowd after they braved the shave last Saturday. At the back are Debbie Winter (hairdresser), Sharon O’Brien, Tania Elsley, Wendy Baigent, Jenni McGee, Helen Nash, Susan Cornish and Matt Cyrus (barber). In front are Marshall, Lachie, and Charlie who shaved their hair in support of a mate.

The Funky Crowd’s brave shave last Saturday was a huge success with over $18,000 already raised for the Leukaemia Foundation, tripling their goal of $5,000.

Six nurses stepped up to the World’s Greatest Shave challenge, called themselves The Funky Crowd, and organised a fundraiser at the Coachman Hotel last week with an auction and lucky door prizes.

“We had the best time,” said Wendy Baigent, who lost her husband seven years ago to Leukaemia. She was joined by col-leagues Helen Nash, Sharon O’Brien, Jenni McGee, Tania Elsley and Susan Cornish.

Sharon and Tania coloured their hair and the rest had their hair shaved by barber Matt Cyrus from Inkredible Experience and Debbie Winter from Janice Cassidy Hair Salon. “They did a fantastic job,” said Wendy.

The nurses were joined by three young boys who also shaved their hair in support of a mate who has cancer.

Wendy said they were overwhelmed by the support of the community. “Parkes has given us so much support. I can’t thank the businesses around town enough for their generosity and everyone who donated money and time to come to the night.

Donations are still welcome in support of The Funky Crowd’s brave shave. Go to the World’s Greatest Shave website and look for the team name.