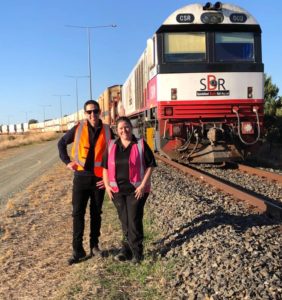 The Australasian Railway Association (ARA) and the Australian Logistics Council will be holding the 2018 Inland Rail Conference in Parkes on 18th and 19th July. ARA General Manager for Freight and Contractors, Duncan
Sheppard met with Trudie Varcoe, Site Supervisor at the SCT Intermodal Terminal last week where a site visit will be conducted for delegates at the conference.

Communities Grant: Parkes Shire Council will upgrade its central business district security network thanks to a $226,306 Safer Communities Fund grant. It will allow Council to install 17 new closed circuit television (CCTV) cameras and signs and upgrade 16 old analogue cameras. Council also plan to erect nine solar security lights and purchase a portable CCTV system with seven cameras and removable bollards to integrate with its existing security
system. The CCTV upgrade will be a deterrent to street crimes and anti-social behaviour and boost the ability of police to monitor and reduce this behaviour. President of the Parkes Chamber of Commerce, Geoff Rice, welcomed the grant. “Getting that amount of money will make it a terrific system.”

Orange Choir At Bogan Gate For Third Time: Bogan Gate CWA members were overwhelmed by the response from locals for the Orange Male Voice Choir concert on Sunday with 127 people from Parkes, Forbes, Trundle, Tullamore, Tottenham, Orange, Condobolin and Bogan Gate attending. The choir performed a varied program,
including some Beatles songs. The performance was fantastic with the very capable and entertaining Barry Patterson
as conductor and talented Heijin Kim from Orange Regional Conservatorium as accompanist. Visitors were able to catch up with friends and meet choir members afterwards while enjoying a delicious afternoon tea provided by CWA members.