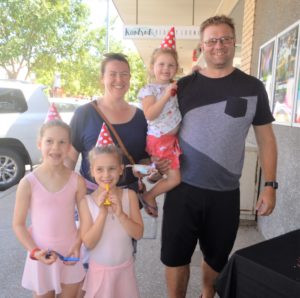 Trundle Library Opens 24 hours, Seven Days a Week: Parkes Shire Council officially opened the first Australian public library to be accessible for members all hours of the day in Tullamore in September 2016. Two years on and the Trundle library has been equipped to make it available 24 hours a day, seven days a week. The new self-borrowing and 24-hour access arrangement will be officially celebrated today. “Opening Tullamore Library all hours proved so successful it was not a difficult decision to continue this service at Trundle Library,” said Manager Cultural, Education & Library Services, Shellie Buckle. There is an easy to use computer setup for members to borrow and return items themselves and a process to apply for a key to the front door. Library Assistant Debbie Anderson will still be on deck from 3pm to 5pm Thursdays and 10am to 1pm, and 2pm to 5pm Fridays.

Bonus Points: Sign up as a new member at the Parkes Leagues Club during December and receive $10 of bonus rewards points!

Brighter Christmas For Country Kids: Stan and Stela Alexander of the Central West NSW Dance Sport Academy will be donating their professional services during December for a Royal Far West fundraiser, while Parkes Leagues Club will be providing free use of their venue. Come and learn to dance for the Parkes Elvis Festival every Tuesday, Wednesday or Friday or even on all three nights every week up to 28th December at 7pm. Stan and Stela will teach all the dances from the Rock ‘n’ Roll era, all Elvis songs, and other artists of the 50-60’s period. A donation of $10 for adults and $5 for kids and teens will go directly to the Royal Far West to assist country kids have a brighter Christmas. The fundraising drive will culminate in a New Year’s Eve party with a live band at the Parkes Leagues Club on Monday, 31st December from 6:30pm.

Light A Candle: The annual candle lighting event of the Parkes Chapter of the Compassionate Friends takes place at Lions Park on Sunday, 9th December from 5:30pm. Candles will be provided or bring your own. In case of inclement weather, the venue will be the Middleton School Hall in Medlyn Street. For more information call Judy Fisher on 0402 599 001.