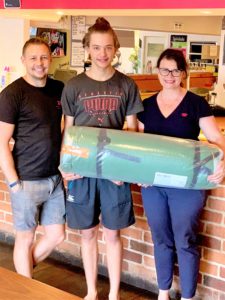 Plan B Winner: Over 3,000 entries were received at 57 participating pubs, clubs and bottle shops across the Parkes, Forbes and Lachlan Shire Council areas in the Plan B competition. Patrons simply had to write down their Plan B to get home rather than driving for the chance to win a swag valued at $250. The Councils’ Road Safety and Injury Prevention Officer, Melanie Suitor said they had received great ones like catching a taxi, walking, staying at a friend’s or getting a lift home to creative ones such as being pushed in a wheel barrow, catching a hot air balloon, riding a kangaroo, flying home or tiptoeing through the tulips. Lea Dickerson from Parkes Liquorland said the competition was simple to implement and was very popular with patrons. The winner of the swag is Thomas Hayward from Parkes. Melanie said the promotion would be repeated in December.

First District Court Judge: Freshly swornin District Court judge Graham Turnbull SC has been appointed to sit as a full-time judge at Orange, Bathurst and Parkes to reduce case backlogs and deliver faster justice. He will be the first District Court judicial officer in history to live and work in this region. “Judge Turnbull comes to the bench with a reputation for being one of the finest criminal barristers in NSW,” said Attorney General Mark Speakman. The District Court will now have a record 75 permanent judges.

Competition: Would you like to take the family on a fun day out? Fancy a trip to the Dubbo Zoo? Enter our competition on page 7 to stand a chance to win a family pass. Get your entries in soon as the closing date is on Wednesday, 27th February!

Rodeo Time: The world of rodeo is coming to Parkes again with the third annual Steve Magill Earthmoving Parkes Rodeo Stampede on 2nd March from 6pm at the Parkes Showgrounds. Following on from its huge success last year, this year’s show promises to be bigger and better yet again! The crowd can look forward to “Mark Outs”, “Breaking the Barrier”, “Header and Heeler” and “Cloverleaf Patterns” to name but some of the entertainment planned for the night. Tickets available at Cunninghams IGA. More information in next week’s paper.

Level 2 Water Restrictions: This is a reminder that level two water restrictions came into effect last month across the Parkes Shire.