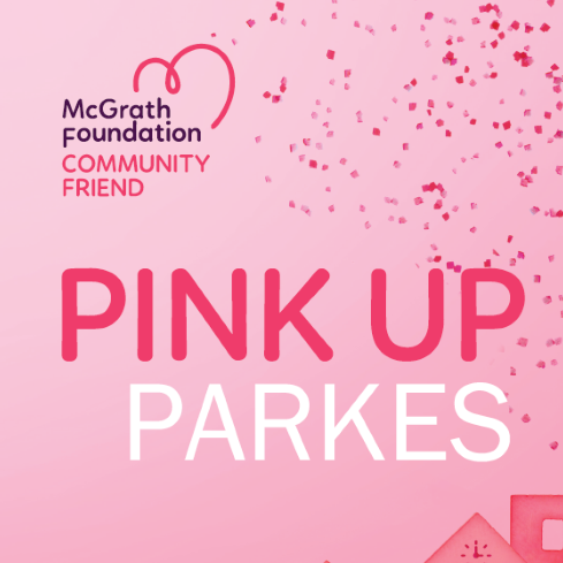 It is the last week of Pink Up Parkes. The community has been fantastic so far. See page 6 of the Parkes Phoenix for the last events on this week that need your participation and support.

Author At Libraries: Karly Lane is a popular Australian rural fiction author and has written 14 best-selling novels set in small country towns. She has grown up and lived in country towns across NSW, including Parkes, and is often referred to as ‘rural fiction’s favourite daughter’. She lived in Parkes from 1986 to 1990 attending Parkes High School and started her first job at the Parkes branch of the State Bank in 1988. Karly will be doing a mini-tour of our shire, speaking at Peak Hill, Trundle and Parkes libraries on 6th, 7th, and 8th November respectively. “This will be a great opportunity for people to meet Karly, hear about her writing, and ask questions about her novels and characters. For any budding authors it is also an opportunity to get some tips for your own writing,” said Parkes Librarian Gillian Hunt. RSVP by ringing 6861 2309. (Win two of Carly’s books in our competition on page 5!)

International Rugby League In Parkes: The Western Rams will be playing a rugby league match against France at the Jock Colley Field in Parkes on Wednesday, 30th October. The two teams locked horns

almost three decades ago in 1990 at Bathurst. “It’s great to continue the tradition and have them back,” said Western Rams Chairman, Peter McDonald. France contested the World 9s in Sydney last weekend, and agreed to revive their rivalry with the green and white to finish their trip down under with a 13-a-side game against an open aged men’s Rams side in Parkes. Tickets available at the gate, $10 adults.

Parkes Shire Praying For Rain: Tomorrow, 26th October, Pastor Christopher Chetland of the Grace Chapel Church in Wonthaggi, Victoria will be visiting the Parkes Shire to pray for rain. After seeing Trundle school principal John Southon on television recently, Christopher felt the need to travel to the region to pray publicly in the streets and dry dams of the shire for rain. He has had over 40 years in ministry, many of which have been spent in mission in Burma, Papua New Guinea and predominantly Kenya where he spends three months of each year with his wife of 57 years, Evelyn, working with Baptist and Presbyterian mission groups. He will be praying publicly in the following locations: Cooke Park, Parkes 9am; Alectown 10.30am; Commercial Park, Peak Hill 11am; Tullamore 1pm; Trundle 2pm; and Bogan Gate 3pm. (These last three times are approximate.)

Learn To Play Bridge: Do you have an interest in learning how to play bridge and in doing so making some new friends? Join members of the Parkes Bridge Club each Monday and Friday for the next six weeks for free lessons and demonstration games at Parkes Library. “I would like to encourage all people to come and play, it is a great game,” said Greig Ball. “We are also looking for new members for our club.” Join in on Mondays 1pm – 3pm and Fridays 10am – 12pm (except 1st November) at the Parkes Library.