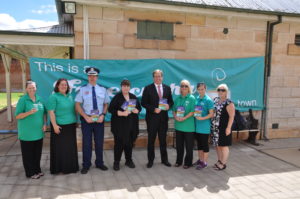 Free Cuppa: The seventh phase of the multi-award winning Free Cuppa for the Driver scheme was recently launched in Dubbo and will run until Wednesday, 31st May. Fatigue is one of the biggest killers on NSW roads – contributing to 72 fatal crashes over the last 12 months. The Free Cuppa scheme allows drivers, who have travelled more than 100km from the address on their driver’s licence, to qualify for a free cup of tea or coffee. More than
5,700 free cuppas have been given away from 185 participating businesses in 161 cities, towns and villages since its inception in 2010. The scheme is expanding to include seven more council areas. Drivers can use the Free Cuppa for the Driver app to find participating businesses.

Bush Telegraph: Keep the wheels rolling – free community information night on Tuesday, 21st March at the Tullamore Bolwing Club and Wednesday, 22nd March at Tottenham Bowling Club with barbeque dinner at 6:30pm followed by two speakers: Fran Rowe, rural financial counselor – funding following disasters; and Steve Matthews from Riverina Bluebells – taking care of yourself and what to look out for with family and friends. RSVP Helen or Sally on 6892 5003 (Tullamore) and Heather Jones on 6892 403 (Tottenham).

Phoenix distribution: The Parkes Phoenix is available in Trundle, Tullamore, Tottenham and Bogan Gate every Friday. Pick up a free copy at the Trundle Newsagency, Casho’s Café in Tullamore, Foodworks and the Post Office in Tottenham, and the Railway Hotel in Bogan Gate.

Australia’s first celebrities: Before they became celebrated Australian icons, the koala and waratah left early colonists almost star struck by their unique appearance! A new travelling display will be opening at Parkes Library from 27th March to 7th April telling the story of how the koala and the waratah were first depicted over 200 years ago, and how they have evolved over time to become national icons. According to curator Sarah Morley, early colonists found it difficult to draw the koala. It evolved over time and in 1933 Dorothy Wall brought the koala to life with her cheeky little character called Blinky Bill. By the 1960s it was used by Qantas to promote Australian tourism. The waratah has had a similarly fascinating journey that helped establish an Australian national identity and give NSW its state flower.