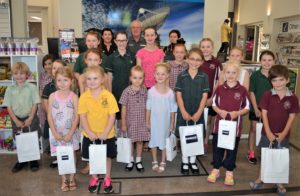 Parkes Aero Spectacular: Just a reminder to come along to the Parkes Aero Club’s 70th anniversary Aero Spectacular on 14th April. There will be a spectacular air display, including the famous Air Force Roulettes as well as Paul Bennett’s aircraft performing their amazing routine. Apart from the air displays, there will be on ground static
displays of antique aircraft and cars, merchandise and food stalls, as well as a jumping castle and other attractions for children. Gates open 10am, air display from 12pm to 3pm. Entry fees: $60 (2 adults, 2 children), adults $25, children to 18 years $10. Purchase your tickets through 123 Tix.

Tullamore Memories: Carol and Ian Jenkins were on a journey around NSW, visiting Warren, when they saw an advertisement for the Tullamore Irish Music Festival. Carol decided it was a great opportunity to pop in to see the old town. “It’s been 60 years since I was last here,” said Carol. Carol’s father, Owen Hubbard was the Tullamore Railway Station Master from 1956-1958. While Carol only lived in Tullamore for those few years before moving to another town, and eventually ending up in Wollongong, she has strong memories of the town, and particularly about the shops along the street, not surprising considering they are right opposite the station.

Craft Corner: If you’re after a unique gift, or something from a local artist, visit Craft Corner at 257 Clarinda Street. To keep up with modern times, the shop has had Eftpos facilities available since early March. “It’s been going well,” said Rhonda Redenbach.