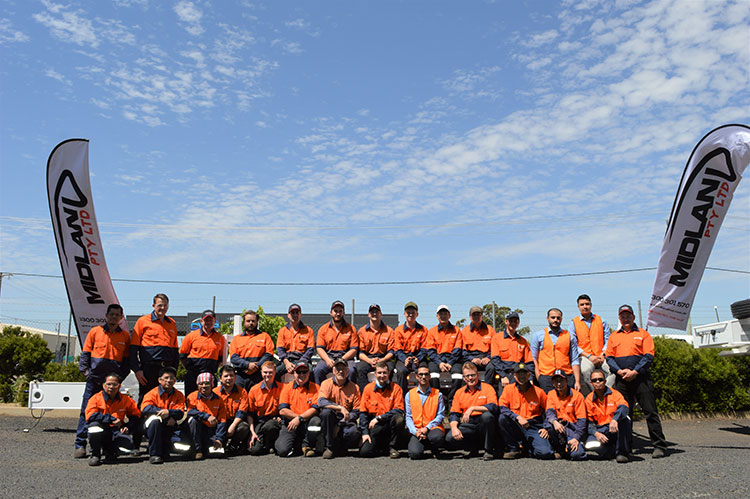 PARKES MADE… The team at Midland Industries in Parkes who are building 42 trailers for the Snowy Hydro 2.0 project. Sales Manager Roy Trimmer is standing on the far right.

A family business in Parkes is playing a major role in the largest renewable energy project in Australia.

Midland Industries landed a contract in May this year to design and build delivery trucks for the massive Snowy 2.0 pumped-hydro project.

The contract to build 14 sets of custom-made trailers totalling 42 trailers presented a massive challenge to the specialist truck trailer manufacturer in Parkes.

“It is a pretty unique story and we have come up with an innovative design that is a first for Australia,” said Sales Manager Roy Trimmer at a media event on Tuesday. “This is record-breaking stuff,” said Snowy 2.0 Relations Manager Dean Lynch of the project that is a first in the world to build a 27km tunnel of 11m in diameter. “Parkes helped solve the problem of transporting 130,500 concrete segments to the two sites.” He said it would’ve taken 45,000 loads on a semi-trailer, but the Midland unique trailer design reduced it to just un- der 15,000 loads.

Midland had to come up with a design to transport nine concrete segments at a time weighing 6.5 tonnes each from the factory in Cooma to the building sites navigating public roads and roundabouts, harsh weather conditions, very steep roads while reducing noise, ensuring no cracking and no failure on the trailers.

“We started with a design used in Iceland and did over 60 simulations with GPS coordinates to eventually come up with this unique design of three axles on each trailer carrying a total load of 91 tonnes,” said Roy. The weight had to be distributed over the axles to lessen the impact on the road surface. A completed truck and set of trailers are 27m long, 2.5m wide and has 46 wheels.

The first six completed trailers were on display this week to the media. Three more are in fit-out stage, while another 33 are yet to be built.

Midland has employed an additional eight people for the project to bring the team to a total of 28, “but we need many more employees,” said Roy. The contract, which has secured jobs for employees during COVID, is said to inject $9 million into the local economy. “It is great for our company, but it is also about the flow-on effect to everyone else,” said Troy.

Dean said the CEO of Snowy 2.0 was very big on getting Australian manufacturers involved in the project.

“It is just so exciting to be out here in Parkes and see design innovation and manufacturing expertise in regional NSW. It is awesome that we can support a business like this. They are not just making trailers, there is so much more to it.”