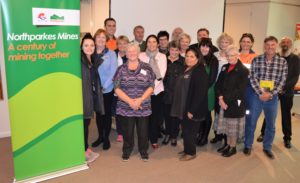 Fourteen learning institutions received a valuable package from the Galari-Lachlan Reconciliation Group last week.
“As part of our desire to share culture and knowledge with the community, we put together a Wiradjuri Cultural Exchange package with a grant we received from CMOC NorthParkes mines,” said David Acheson, co-chair of the group.

At the presentation event with representatives of the institutions, the DVD “Yindyamarra Yambuwan” was shown with introductions from Dr Uncle Stan Grant and his  sister Aunty Flo Grant. They talk about the importance of respect in the Wiradjuri culture.