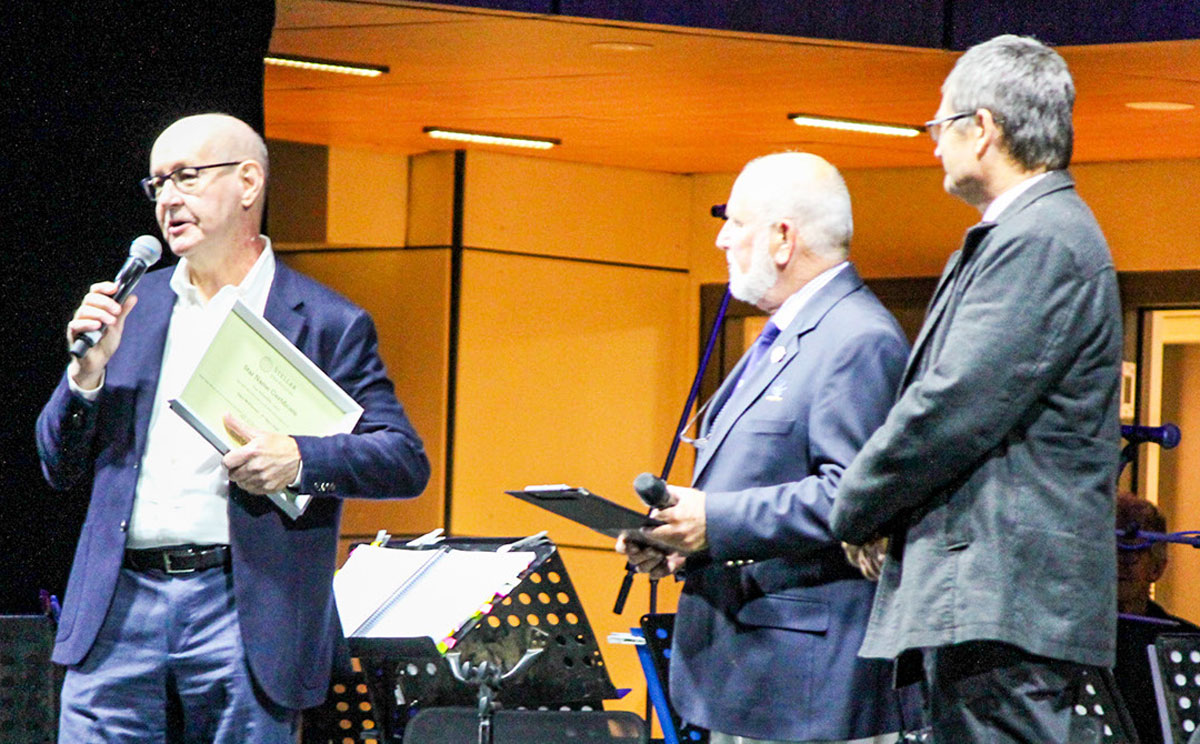 SHINING BRIGHT… Professor Gary McPherson (left) is the second person to receive the symbolic honour of a Star of Parkes Shire. Parkes Shire Mayor Ken Keith and Deputy Mayor Neil Westcott are with him on stage at the Cooke Park Pavilion.

The second Star of Parkes Shire was awarded to music educator, academic and musician Professor Gary McPherson at the inaugural Overture event at Cooke Park Pavilion earlier this month.

“We are proud of you and the wonderful role model that you have been for Parkes Shire and for the musical community,” said Parkes Shire Mayor Ken Keith. “Your achievement will continue to inspire future generations to achieve their best in their chosen fields.”

The star in the Orion Belt, that can be seen in the night sky in the southern hemisphere, was presented to Gary under the night sky during the interval of Overture in front of more than 900 people who came to enjoy a celebration of music.

“The Parkes Shire Council is proud to present you with the second Star of Parkes Shire, which is a symbolic honour, inspired by the tradition of presenting the Key to the City,” said the Mayor.

“The Stars are reflective of the Parkes Shire – our starry skies, the iconic CSIRO radio telescope, and our shining future.

“Together with my fellow Councillors, I congratulate you and recognise your outstanding achievement in your chosen field, as a music educator, academic and musician, who has researched and published numerous books on musical development, performance science and psychology. The Star recognises your dedication, ability, and desire to succeed and the sacrifices you have made to reach the pinnacle of your career.”

Gary thanked the Mayor for the honour and recalled how his musical journey started playing soprano cornet as a boy in the Parkes town band.

By age 16 he had won over 50 regional, state and Australian titles, and changed to playing trumpet the last two years of high school.

He graduated in 1977 at the NSW Conservatorium of Music, obtained a Licentiate and Fellowship in trumpet from Trinity College, London (1975-1976), and in 1982 graduated with a Master of Music Education at Indiana University. He completed his PhD in music at the University of Sydney (1993).

His research has provided and increased understanding of how individuals develop wide ranging musical skills. Researching biological, cognitive and social processes and the personal, environmental and developmental factors that affect musical development, ability, identity and well-being.