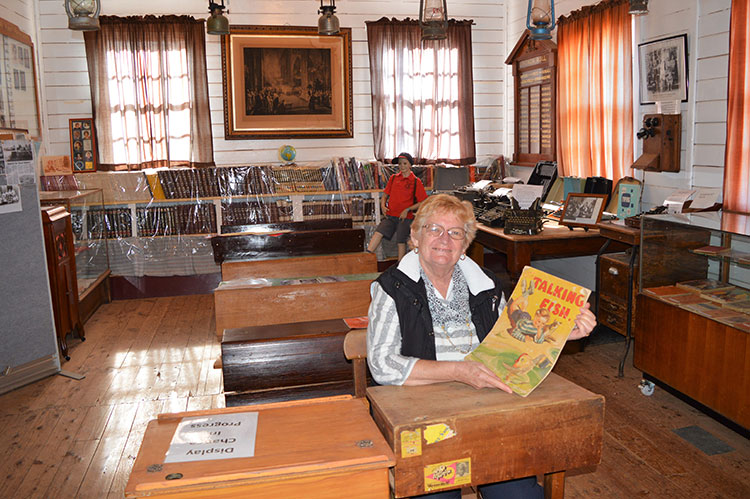 Rose Jones, who has a passion for the preservation of history, feels very much at home in the Wongalea School.

Of the 88 one-teacher schools that used to be in the Parkes Shire, the Wongalea School became the most famous.

After the school building’s feature role in the 1972 movie Sunstruck, it became the property of the Parkes and District Historical Society.

Today it is one of only two remaining one-teacher school buildings, and has just been revamped by the Parkes and District Historical Society members during COVID-19 isolation.

“We have added lots of memorabilia like books, pens, ink wells, school satchels, a collection of typewriters and lots more,” said Rose Jones, who compiled the history of the school in a book.

They have also researched many of the other one-teacher schools and added their stories to the collection.

“The school first came to my attention when I began to research my husband’s family. My father-in-law was an ex-student and he also purchased the teacher’s residence by tender after the school’s closure.” She said to her amazement very little had been recorded about the school.

“There is so much interest in this building, and so many locals went to these schools, we need to preserve this history,” said Rose. “It is just great that we still have the building here on site.”

According to Rose’s book the school was located 20km northwest of Parkes on the public road to Trundle in the Parish of Gunningbland. The building was a cypress wood structure and construction was completed on 25th October 1912. There were 50 settlers at the time, with 15 children of school age.

Approval for the establishment of the school was granted on 17th June 1912, and the Department of Education contributed 85 pounds towards the cost and provided requisite furniture from Sydney.

The school opened in January 1913 with Eva Squire appointed as the first teacher. By 1918 there were 36 pupils and the existing building was lengthened by ten feet. In 1927 the teacher’s residence was built, as well as a tennis court.

The following year a 1,000 gallon water tank was installed and the pupils did not have to carry water to the school any more.

Some other highlights of the school’s history, as recorded by Rose, included a touring English football team visiting the school in 1936; the planting of 100 trees on Arbor Day in 1938 when the school acquired two more acres of land; in the 1950s the school took part in a street procession in Parkes with a float; participation in the annual small schools sports carnival from the 1960s; and the school’s golden jubilee celebrated in 1963 with 400 people attending. The school had 16 teachers over the 50 years. The school closed in May 1970 due to a fall in numbers.

In 1971 the school’s second life started when it was bought for the movie, transferred to Nelungaloo and renamed Kookaburra Springs.

The world premiere for Sunstruck was held on 25th November 1972 in Parkes, and the streets were lined with people as the stars travelled from their hotel to the movie theatre in vintage cars.

The Wongalea School can be visited at the Henry Parkes Historical Museum where it started its third life in 1972.