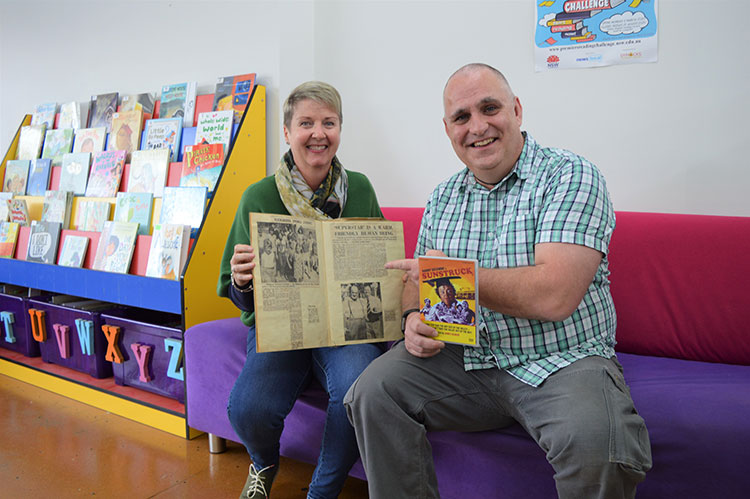 GOOD MEMORIES… Sharryn Cunningham shows Dan Fredericks of the Parkes Shire Library the scrap book her mum made of her acting experience. Dan is holding a DVD of the movie Sunstruck.

“There are many towns and villages within the Parkes Shire LGA (local government area), Wongalea is just one of them.”

This is how Parkes library officer and historian Dan Fredericks started his most recent history blog that has caused quite a stir.

“There has been lots of interest. It is so exciting,” said Dan, who spent the last five years researching the story of the famous one-teacher school house that featured in the movie Sunstruck.

The filming of the early 1970s movie by an international film crew starring Harry Secombe struck a chord with the Parkes community, and bringing back those memories through the blog has put Dan in the limelight too.

It was not just locals getting excited, but the media swarmed around Dan too to talk about the story.

Seems like Dan’s publishing of this feel good story was timed perfectly during the COVID-19 isolation period when we all needed a dose of good news.

“It was a big deal to have Harry Secombe, best known from ‘The Goon Show’ with Spike Milligan and Peter Sellers, come to Parkes at the height of his popularity,” said Dan. 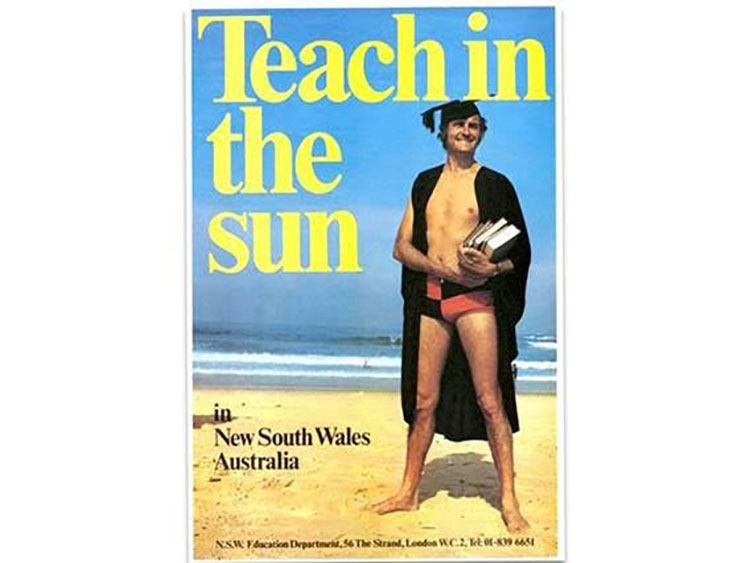 Sunstruck is a classic fish-out-of-water plot and was inspired by a promotional poster from the NSW Department of Education trying to entice British teachers to NSW.

Instead of ending up on Bondi Beach, as depicted in the poster, the film’s writers decided to have Harry’s character end up in a one-horse town where nothing happens.

That town was Nelungaloo, which became the fictional setting of Kookaburra Springs. The production company bought the Braeside home in Nelungaloo which was con- verted into the pub. They also bought the Wongalea Public School’s building and moved it next door to the pub

The Parkes district was filled with excitement and welcomed the overseas film crew into the community with many of them ending up on screen or helping out off screen. The producers were especially impressed with the acting abilities of the Parkes children.

Sharryn Cunningham (nee Helm), was one of the youngest of the 14 children from Parkes picked for the 16 roles in the film. At seven years old, she had a huge adventure experiencing many firsts in her life, like flying to Sydney, going to Luna Park, eating her first steak and being sent home to Bindogundra after a long day of filming in a taxi.

“I just have good memories of those six odd weeks. We got along so well.”

Although Sharryn has never been on a movie set again, she has another close connection with the other famous movie to come out of Parkes, The Dish. Her grandfather Austie Helm, sold his property to the CSIRO where the radio telescope is today.

Other locals featured as extras in the movie. Pam Nankivell remembers well how all her friends dressed up and did not get in. So she decided to put on her daggiest clothes and she was picked for the farewell party scene.

Local tradesmen also helped to build and paint the set, and one handyman with similar build and height to Harry caught the eye of the producers. Carl Christopherson was thrilled to be picked as Harry’s stand in.

More members of the community had an opportunity to contribute when the art director appealed to locals to provide props for the film.

In turn the crew ingrained themselves into the community making the Coachman Hotel their base. Lead actors Harry Secombe and Maggie Fitzgibbon were happy to perform in a charity night for Rosedurnate. Harry brought over his family, and his kids would go to the pool. Dan said locals remembered Harry as warm and friendly.

The Wongalea school house, now 108 years old, has not only been immortalised in the movie, but can still be visited at the Henry Parkes Historical Museum.