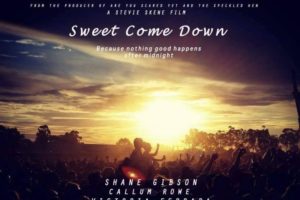 Forbes local Stevie Skene is leaving no stone unturned to see the movie Sweet Come Down completed and released.
The movie is about eight revellers whose lives are forever changed by a violent, monstrous act at a fictitious music festival in rural Australia. The film explores male objectification, the mistreatment of women and prevalent draconian attitudes in today’s society. In her debut as indigenous female director and co-producer, Stevie has the support of Urthboy and VanFest organiser, Matt Clifton, as well as a stellar cast of Australian talent: Victoria Ferrara (Houso’s v Authority), Roger Ward (Mad Max) and Sam Wallace (Devil’s Playground and Puberty Blues).

“We have come a long way, and we always seek more sponsorship, investment and support. Drop us a line if you want to help and make a difference, or if you want to be an extra for the shoot over five days, including the VanFest,” said Stevie. Find Sweet Come Down on Facebook.