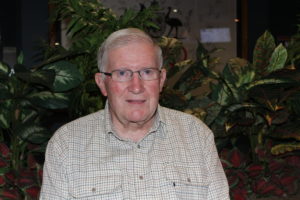 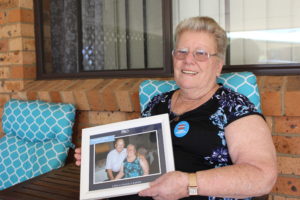 Local retiree June Edwards is about to do something few of us are brave enough to consider. Next week she will shave her head to raise money for leukaemia research.

Like many who take this step, June was inspired by personal tragedy. June lost her beloved husband John Edwards to can- cer six months ago. So, when she saw the World’s Greatest Shave was approaching she didn’t think twice about signing up. “He’s worth it,” she said. “He was such a lovely, gentle man.”

June and John had seven happy years together. “It was a big loss and I still feel it terribly.”

June is hoping to raise $1,000 for the cause, and is already humbled by the con- tributions she has received from her family, friends and even strangers.

June admits to feeling apprehensive about her bold new look. “I’m a little bit nervous, but it’ll grow back,” she laughed “at least it better!

“The funny thing is John never liked short hair. I don’t know what he’d say now, but it’s for a good cause.”

The Parkes Services Club President Terry Knowles has also put his hair on the line. The rights to make the first cut will be auctioned to the highest bidder on the day.

“I have banned sheep shears and cut throat razor from the club,” he joked.

Terry’s personal hairdresser will complete the job; his great-niece is just weeks into her apprenticeship at Janice Cassidy’ Sa- lon.

“Leukaemia is an extremely serious disease,” he said, “it can really affect anyone, so it’s definitely something I wanted to support.”

June and Terry will go under the shears at Parkes Services Club at 4pm on Sun- day, 19th March. There will be entertain- ment, professional hairdressers to do head shaves, hair colouring and a raffle. Come and lend your support to our bald fundrais- ers.