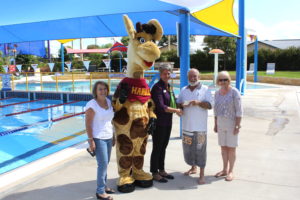 The Parkes pool was the place to be on Sunday as it hosted a flotilla of events to celebrate the very last day of the swimming season.

The day began with a swim-a-thon relay, raising approximately $4,000 for the Life Education Van. Various organisations assembled teams, swimming continuous laps of the pool. Even Healthy Harold showed his support from the sidelines. They swam an estimated 850 laps over the day, with Mayor Ken Keith contributing an impressive 64 laps to the tally.

“I would like to express my appreciation to the many swimmers who participated and to the sponsors that supported them,” the Mayor said. “I would also like to thank Quota for their $1,000 donation, and for providing fruit platters on the day.”

Sharon Ross from the Aquatic Centre said the classes were very well received. “I got some very positive feedback from a lot of parents, which was great,” she said.

The fun kept going well into the evening, with a free splash party for Youth Week, which was a joint initiative of Parkes Shire Council and CDAT (Community Drug Action Team). Dozens of kids made good use of the inflatable pontoon and enjoyed the free barbeque.

The Parkes Sharks Swim Team held their end of season presentations in the evening, with 90 of their members attending. While the presentation night signals the end of the Parkes swim season, club secretary Barbara Weaver said training is a year-round commitment for many of their swimmers who travel to Orange to train over winter.