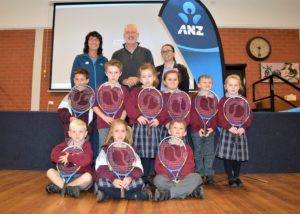 You might be staying up late watching the French Open in Paris, but this week the ‘Parkes East Open’ was in full swing featuring Australian tennis star John Fitzgerald. Parkes East was picked as one of 30 schools in Australia for the ANZ Hot Shots Racquet Roadshow. The team from Tennis Australia will hand out 30,000 racquets to Kindergarten students over six weeks.

On Monday it was the turn of Parkes East students to serve up a volley of questions when Fitzy, as he is known, talked to them about his tennis career and showed his Davis Cup shirt and copy of the trophy around. During his career Fitzy has won six toplevel singles titles and 30 tour doubles titles, including 7 Grand Slam doubles titles, and a career men’s doubles Grand Slam.

He reached the World No. 1 doubles ranking in 1991. He was a member of the Australian team which won the Davis Cup in 1983 and 1986. Fitzy is passionate about Hot Shots,  which is an entry level tennis program for five to 12-year-old children. “This program uses modified equipment so the kids can play from the first day and they can play anywhere. This gives them a taste of tennis and they have fun, which is the most important.”

“Tennis has been my life,” said Fitzy, “but a highlight for me is still that cheesy smile I get every time we hand out a racquet to a child.”