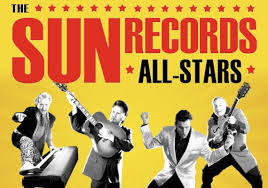 The Sun Records All-Stars show, direct from the USA, showcases the music and artists of the birth of rock ’n roll and the musicians that contributed to the history of music. Sun Records and Sun Studios was launched by legendary American producer Sam Phillips in 1950 and became the launching pad for numerous stars, most notably Elvis Presley, Johnny Cash, Jerry Lee Lewis, Carl Perkins and Roy Orbison. The show, presented in two parts, features all the hits that captures the imagination, the passion and the phenomenon of this incredible era of music.