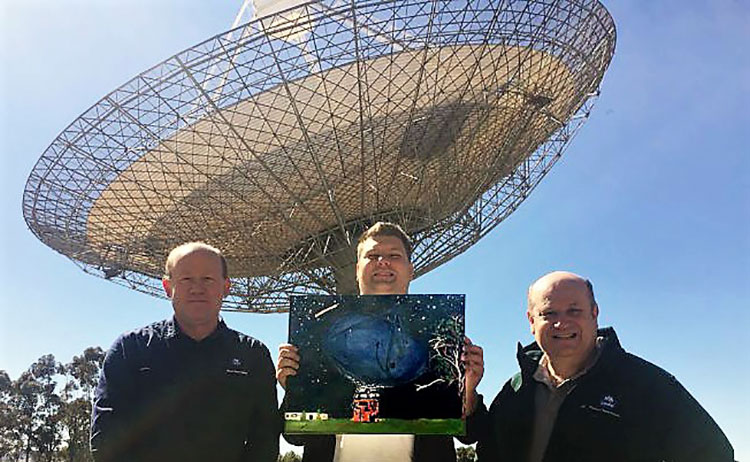 Mal Smith, Sebastian Sadgrove with his painting and John Sarkissian at The Dish.

It is not all about space science and finding alien life at the Parkes Radio Telescope as a Currajong Disability Services (CDS) participant has discovered.

Sebastian Sadgrove’s artwork called the Blue Dish on display at the Visitor’s Centre has received wonderful feedback and will soon be immortalised with a plaque at a special event on 3rd April.

“It is a dream come true and hopefully I inspire others with autism and disabilities to achieve their goals too!” said Sebastian who donated his creation after The Dish started participating in World Autism Month turning it blue.

“The support shown to me and autism in Parkes and the Central West by the community and CSIRO Parkes Radio Telescope has been phenomenal.

Operations Scientist at the Parkes Radio Telescope, John Sarkissian could not be more pleased with the initiative shown by Sebastian and CDS.

“We try to do our bit for the local community and were more than happy to support the idea to light the dish in blue,” said John.

Site Leader Mal Smith agreed saying: “We love supporting local groups. This is a unique painting and we love it!”

With World Autism Month fast approaching in April, Sebastian will be very proud to see his painting showcased at the CSIRO Parkes Radio Telescope for the cause of autism.