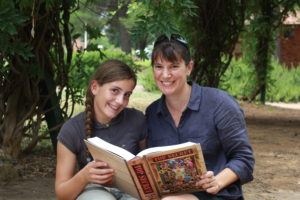 The secret is out – talent runs in the Butler family. January was an exceptional month for Ella and Amy Butler, with the motherdaughter duo each receiving recognition for their literary flair. Amy was declared Best Novice Poet at the Elvis Festival’s Poets’ Breakfast. Then, just weeks later, her 12 year-old daughter Ella received the Student Cultural Award in recognition for her written skills, which was presented at the Australia Day ceremony.

Amy said her daughter’s nomination was a huge surprise. “It’s wonderful to know that someone in the community took enough notice. Because she’s home schooled, there haven’t really been the same opportunities for awards and recognition, so this has been a huge honour for us,” she said. Ella’s nomination follows her first publication in Top Secret, a national anthology. Her short story “Beware the Griffin” is a tale about children on a quest to save their parents.

“I’ve always loved fantasy, and mythology; dragons, phoenixes and griffins are my favourite,” Ella said. “But when it comes to writing, it’s not all about the story; description and grammar are really important, that’s what makes you care about what’s happening.” Ella credits the Parkes Shire Library’s Dan Fredericks as one of her mentors. “Dan was probably the motivation for me getting published, and my mum is my inspiration for actually writing.”

Amy has a background in broadcast journalism and worked as a researcher and writer before she made the decision to home school her children. She’s written poetry for years, but this year was the first time she’d put it out there publicly. But despite her recent accolades, Amy’s current focus is on being a mentor to her children’s writing.

“Our family really values creativity and imagination. We bounce ideas off one another and love making up stories and sharing stories together,” she said. As for Ella’s ambitions – she has already got plans for her first novel. Having earned such recognition, encouragement and support at such a young age, it’s safe to say Ella is ‘write’ on track.