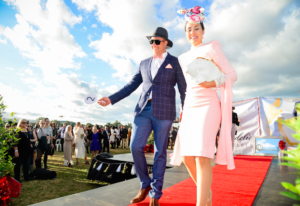 The Parkes social event of the year did not disappoint last Saturday when a crowd of around 2,000 people, many travelling interstate, flocked to the annual Picnic Races.

While the Coradgery Cup for the main race went to jockey Jamie Gibbons on Kijitsu, trained by Andrew Bourke from Boorowa, the competition on the Fashions on the Field stage was just as competitive.

Main judge Jay Fisher and his fellow judges had to make some tough choices as entries for this popular event saw an increase this year. Jay, who is a model in Sydney, said he was very impressed with the effort people had put in.

Many people commented that the new stage made a big difference with a large crowd gathering to watch the judging.

“It was a great day,” said Mick Craft, Vice-President of the Parkes Coradgery and Diggers Picnic Race committee. “We had about the same crowd as last year and took more than $23,000 at the gate.”

He was very happy the weather, starting out windy and cold in the morning, turned and it became a beautiful afternoon with families and friends having a wonderful time.