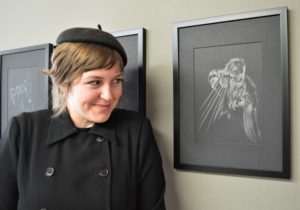 They are everyday creatures like birds, bats, spiders and snakes, but like you’ve never seen them before glistening in the light or fading away as you move. Alice Stokes’ graphite drawings on charcoal and black paper on show at the
Parkes Library take you into the wonderland of her backyard at night.

“I feel the night get such a bad rap of being evil when it is the time when we dream and look up at the stars to experience the wonder of the universe.”

She admits to being mostly nocturnal in Berlin, her home for the past four years where she sharpened her creativity skills, until she returned to Parkes late last year. It was the black beauty of a raven that sparked inspiration for what became her first local exhibition called Australian Gothic Local.

“I was drawing ravens for about two months and going a bit crazy, when a friend talked about the beauty of red back spiders. I fear them, but had one in the house, and I tried getting it outside alive.”

Alice said when she started looking at spiders in books, their eyes were really big in the close-up photos. “They looked so cute, like little anime characters. I did not draw spiders to make them scary and decided to include spirographs. “Some things just come up when you are drawing. While the spirographs are childhood stuff it also looks like a spider’s weaving and reminds me of natural fractal patterns and the fates in Greek Mythology.”

Alice started experimenting drawing on charcoal in Berlin after she found a pamphlet from the Seventies about space. “It was all in German, but the pictures of astronauts and the moon were really cute. I started playing with charcoal and managed to draw on it. I liked how shiny it was and the beautiful contrast it created. But it is also very difficult to draw on and messy.” Two raven drawings in the exhibition are on charcoal, but the rest were done on black paper.

“Looking at the 20 pieces on exhibition I realised it was very dark, not in an evil sense, but more dreamlike with a sense of wonder and curiosity. I feel like I am only just scratching the surface of my work.” Alice has started reading about Jung’s work on dream imaginary, alchemy and archetypes “and I want to dig more into it.” She is keen to explore more alchemy art mixing science and imagination, as well as personified abstract things to eventually progress into drawing her own creatures.

Alice’s exhibition will run until 28th July at the Parkes Library. She also has three works in the “Here and Now” exhibition on show at the Orange Regional Gallery until 15th July.