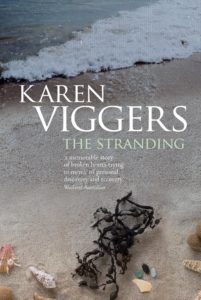 Karen Viggers has an impressive career – two impressive careers to be exact. The Canberra-based writer has three published novels, is a veterinarian with a PhD under her belt, and also a mother of two. Although Karen was a keen story teller as a child, she ended up pursuing a career in science. It wasn’t until after her children were born that her literary talents were rekindled. Her husband is an ecologist and they found it was difficult for their family to maintain two science careers, so Karen took some time off and wrote a book.

In a typical week she dedicates four days to writing, and one day to her work as a vet. Whilst managing simultaneous careers in science and the arts may seem contradictory, Karen says that her background actually compliments her creative writing. She was already writing academically and completing a PhD is not that different to writing a novel.

It typically takes her about three years to complete each book, which can involve anything between six to sixty drafts. The first draft is usually a chaotic dumping of ideas, but surprisingly Karen says it is the second draft which is the hardest; when all those ideas need to be crafted into a story.

The landscape is a central feature in her work. As a wildlife veterinarian, Karen travelled to some amazing locations, and it’s no wonder that some of these places have become integral to her novels. Karen says that she’s often inspired by the spiritual connection people have to their land. While her stories are contemporary, they’re threaded with history. Her novels examine the things we inherit from the past and how that baggage makes us who we are.

“They’re stories about the extraordinary lives of ordinary people,” she says. While Karen has travelled a lot, this coming Tuesday will be her first trip to Parkes when she visits the Parkes Library as part of the Curiosity + Wonder Festival. You can join her for a lunch and talk on Tuesday, 6th September at 12pm. RSVP to the Library on 6861 2309.