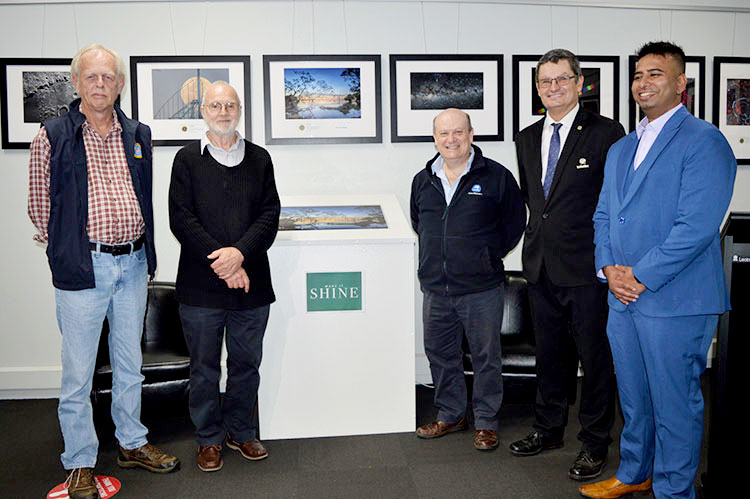 SPARKLING… At the opening of the astrophotography exhibition at the Parkes Radio Telescope were (L-R) President of CWAS Tim Anderson, Dr David Malin, John Sarkissian, Cr Neil Westcott and CEO of Make It Shine Fidah Chowdhury.

An exhibition portraying the powerful mix of art and science opened at the Visitor’s Centre of the CSIRO Parkes Observatory on Wednesday.

The 17th annual Dr David Malin astrophotography competition of the Central West Astronomical Society (CWAS) went ahead in July this year despite the cancellation of the Astrofest due to COVID-19.

The opening of the permanent exhibition of the competition for amateur astronomers and photographers, which has become Australia’s largest photographic exhibition with over 200,000 visitors, was postponed until this week.

“This week is World Space Week, and today is the 75th anniversary of the birth of radio astronomy in Australia, and we thought an appropriate date to open this exhibition,” said organiser of the competition John Sarkissian.

World-renowned astrophotographer, Dr David Malin, who judged the entries in the competition, said on Wednesday the quality of images were better every year. “The mix of art and science also gets better, and this year the focus shifted to technology.” He made special mention of the overall winner Mark Polsen’s entry called Tranquility Base – a landscape image with the moon and Venus peeping through the trees at twilight. “The wonderful colours printed on glass makes it sparkle.”

The winning image was specially printed on glass by Make It Shine in a new partnership with the competition.