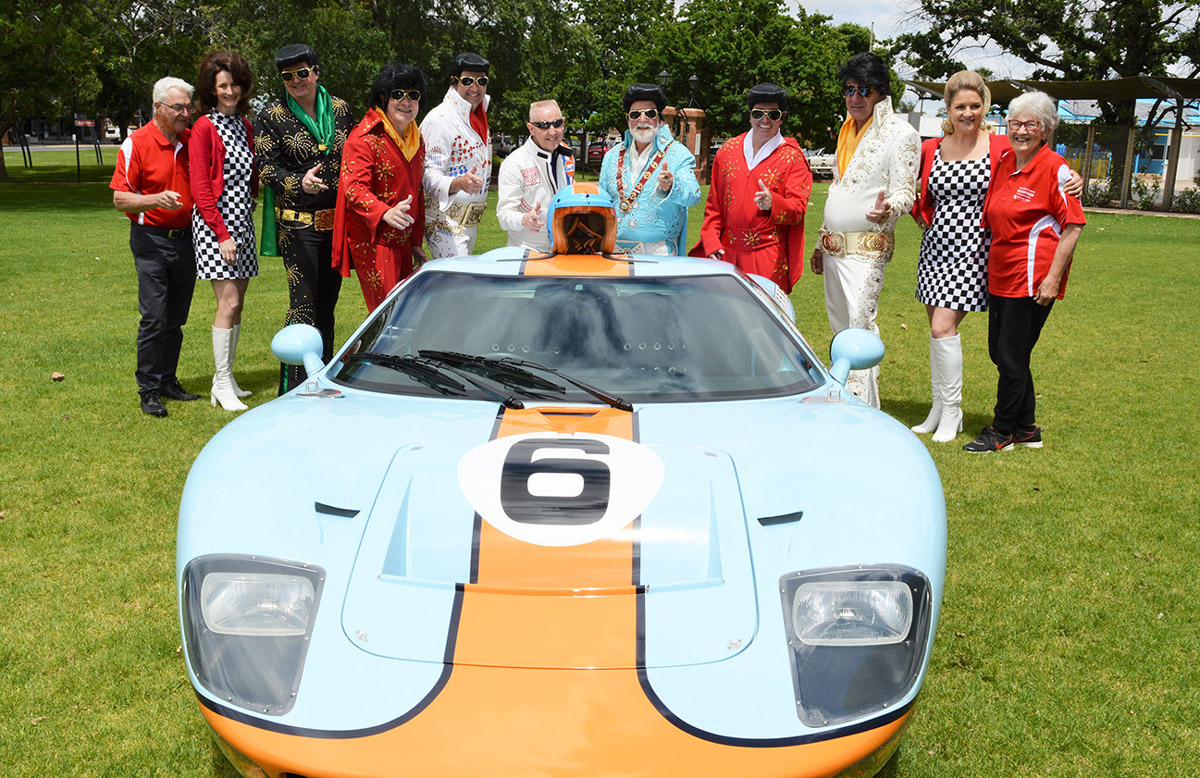 The King may have left the building for a short while, but on Monday excitement for the return of the Parkes Elvis Festival in April next year was palpable as ticket sales went crazy on the first day.

Not only did the tickets for the Elvis Express train from Sydney sold out in the first 12 minutes, but by Tuesday record ticket sales had been recorded.

Adding to the elation on Monday was the launch of the festival at the brand-new Cooke Park Pavilion with three politicians and the Parkes Mayor festively dressed in Elvis jumpsuits, wigs and sunglasses.

But it was the Ford MKI GT40, one of only five of its kind in Australia, getting all the attention. Add in owner and Parkes resident Dusty Powter, dressed in a matching racing suit and shoes, to set the tone for the Speedway theme of next year’s festival. The 1968 musical action film starring Elvis Presley as a race car driver, will not only provide plenty of ideas to dress in theme, but will also be a must visit for car enthusiasts.

The festival organisers have been able to plan extra events around the theme, thanks to a $160,000 grant from the NSW Government, that includes a Speedway precinct where visitors will be able to see collector cars not seen anywhere else in Australia, and meet special guests from the racing industry.

“The special Speedway show starring Mark Anthony, has never been performed anywhere else in Australia and promises to be something not to be missed,” said Parkes Elvis Festival Director, Cathy Treasure.

She said at least 20,000 people were expected to attend with a big increase in caravaners and campers as it would be cooler weather in April.

“We’ve faced so many challenges over the past two years, but the biggest challenge is going to choose what to see at the festival.”

Taylor Rodriguez, one of the youngest and best tribute artists, will be making his Australian debut with four action-packed shows. Another incredible feat for the festival is getting Charles Stone to come. He worked with Elvis as tour producer in the 1970s.

The inductee to the Wall of Fame will be Australian music legend Brian Cadd, while Australia’s most decorated country artist Adam Harvey will perform a tribute to Elvis’s many country music hits.

“This is what it’s all about – having fun and getting back together,” said Member for Riverina Michael McCormack on Monday. “COVID has been so tough, and it is time to let loose. I love it when people can come together as communities to celebrate all that is great about regional Australia.”

Deputy Premier of NSW Paul Toole said the Parkes Elvis Festival was critical to get communities up and running again, and driving the local economy. “Parkes is one of first events to be back. People want to get out of Sydney and metro areas. They’ve been living in that concrete jungle for a long time and they want to get out and explore regional NSW, and what better opportunity to do that.”