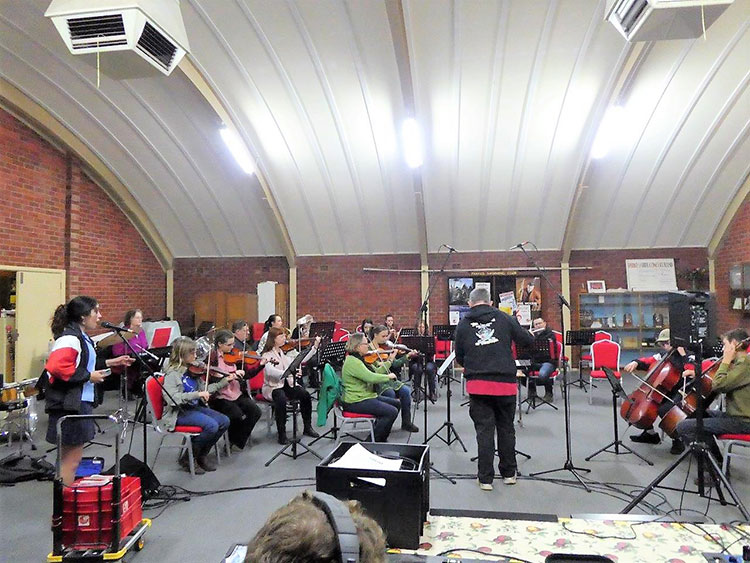 UNITED IN MUSIC… Musicians from two town bands and several string players joined up last Tuesday to record a beautiful Indigenous song for this year’s AMEB Online Orchestra project. The song is called Morning Star, Evening Star and is a newly commissioned song that tells the story of two stars in the Australian sky.

Musicians from Parkes and further afield joined up last week for a nationwide initiative to record a beautiful Indigenous piece of music.

Musicians and singers from all over Australia are recording ‘Morning Star, Evening Star’ as part of the Australian Music Examinations Board (AMEB) Online Orchestra – the country’s largest virtual orchestra.

This year’s piece of music for this annual event, is a newly commissioned song written by Yugambeh songwoman and Indigenous Ethnomusicologist Candace Kruger, with co-writers Lann Levinge and Isobella Kruger. Morning Star, Evening Star is based on an Aboriginal lullaby sung by Lottie Eaton [nee Levigne] to Candace and Lann, and tells the story of two stars seen in the Australian skies.

Members of the Parkes Shire Concert Band (PSCB) and Forbes Shire Concert Band, as well as local string players from Parkes, Trundle and Eugowra were delighted to be part of the initiative, with Parkes High School student Hannah Dun singing. PSCB’s Duncan Clement was conducting, and Darren Mann did the recording.

“All musicians involved have been greatly encouraged by the opportunity to play and sing such beautiful music together,” said one of the organisers, Pam Parkin. “It is always a lot of fun to play music in a bigger group, and to be able to do so with a piece of music which describes the beauty of our Australian skies so well, was a real treat.”

The group plan to perform Morning Star, Evening Star at the NAIDOC celebrations at the Wirdadjuri Amphitheatre next Saturday, 10th July, depending on the COVID restrictions on the day.