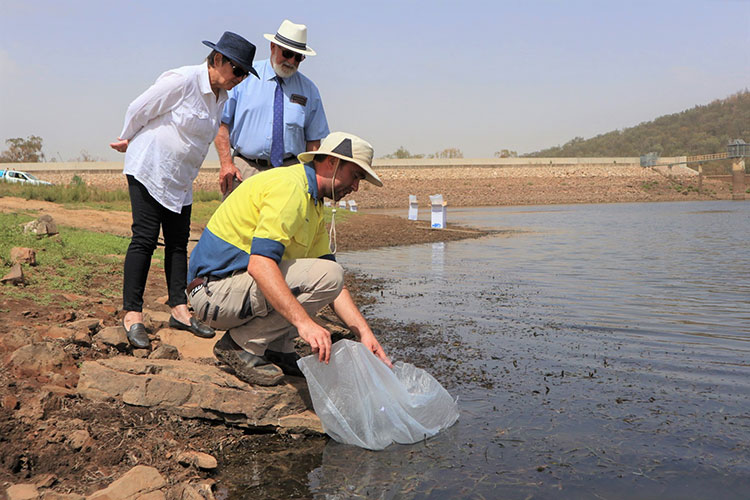 In about two years’ time fishing at Lake Endeavour promises to be abundant after the release of over 16,000 fingerlings recently.

The Native Fish Stocking initiative by the Department Primary Industries (DPI) Fisheries was carried out by Parkes Shire Council.A total of 11,600 Murray Cod and 4,500 Golden Perch were released in an effort to increase the health and biodiversity of the dam, as well as enhance recreational freshwater fishing opportunities for locals and visitors.

The program also assists in the development of regional aquaculture industries, as well as increases awareness and understanding of responsible stocking.

“While Murray Cod were once widespread throughout the Murray Darling system, they unfortunately are now listed as a threatened species – so these restocking efforts are extremely important for restoring and increasing the local populations,” said Parkes Shire Council’s Environmental and Sustainability Coordinator Michael Chambers.

“With the last fish release at Lake Endeavour in 2015, we’ve been working with DPI for the past two years to secure fish for this recent release.”

Michael said it would take two years before these fish were a catchable size.

Parkes Shire Deputy Mayor, Cr Barbara Newton said: “As an integral part of our Shire’s waterways, it’s important that we foster a sustainable and productive environment at Lake Endeavour, as well as ensure the precinct is there for residents and visitors to participate in passive recreation for years to come.”

Access permits for Lake Endeavour are available from Council for passive recreational activities such as bushwalking, bird watching, fishing and picnicking.

Anglers wishing to fish at Lake Endeavour must apply for a recreational fishing licence through the Service NSW website and pay the associated fee.