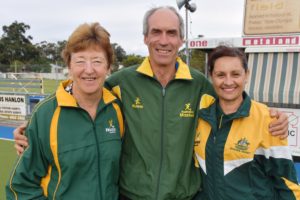 Three hockey players will wave the flag for Parkes in Spain next year when they play for Australia at the Masters Hockey World Cup in Terrassa and Barcelona. Maureen Massey, Graeme Tanswell and Sharon Dixon were selected for three Australian teams recently.

Maureen Massey is a real veteran when it comes to masters hockey. She was selected in the Australian women’s over 60’s team after playing in the NSW over 65’s team at the Australian Championships in Newcastle recently. Her team was undefeated throughout the tournament and won the gold medal after defeating Western Australia eight goals to nil in the final.

This will be Maureen’s sixth time to represented Australia, only returning from the UK earlier this year playing goalkeeper for the Australian women’s over 60’s team. The team played a number of games against Ireland, Scotland, Wales and England.

Maureen, who retired from hockey when she was 50 but was convinced by her daughters to play again, will be taking part in her third World Cup event. “It is hard work to keep up my fitness, but I would not do it if I did not enjoy it,” said Maureen.