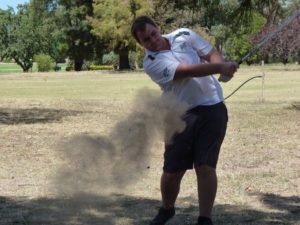 The Division 1 side continued its winning way with a solid 3 and 2 victory. Justin Sutton, Mitch McGlashan and Robert Hey recorded victories, while Peter Dixon and Joey Van Opynen put up a courageous effort in going down narrowly.

Despite losing narrowly to Bathurst 3 and 2 in the first round, the Division 2 side bounced back with a convincing 4 and 1 win over arch rivals Forbes. Both Tim Burke

The talented no. 3 side completely up- staged Cowra with a convincing 4 and 1 victory with Colin Barker, Tony Hendry, Richard Hutchison and Peter Bristol all winning. Jake Hodge suffered his first loss. The no. 4 side suffered a whitewash loss, however hey have vowed to bounce back in this weekend’s clash with Duntryleague. The third round will be played on Sunday against Duntryleague at Cowra Golf Club.

The Division 1 side has a bye this week. By Paul Thomas