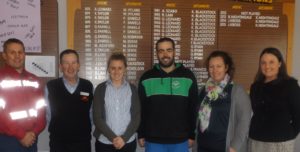 The Parkes and Forbes Squash Clubs are making history this weekend by hosting the first ever NSW Junior State Age Squash Championships to be held in a regional centre. To make the event even more spectacular, it will be one of only two gold ranked events to be held in the State this year, which means top players from around Australia will be competing because of the ranking points on offer.

The Parkes and Forbes Clubs have had some fantastic local support, with Parkes Services Club going above and beyond to make the event a success and ensure the facilities are top class. All four courts in Parkes have been renovated in the past six months, with a complete renewal of front walls, floors sanded and the entire centre painted.

Western Road Liners are offering bus services between the two centres for the tournament. Parkes Diagnostic is a major local sponsor, with three local motels, All Settlers, Henry Parkes and the Astro Dish. Parkes Shire Council and Northparkes Mines have been generous in lending marquees, temporary fencing and other items to extend the Squash Centre into the car park to house the large expectant crowd.