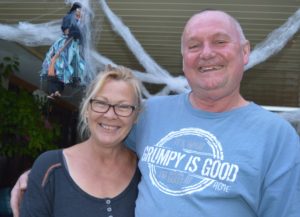 It was time again to celebrate all things spooky and dress up in witches hats, knock on front doors smothered in fake cobwebs and be rewarded with lollies. As Halloween grows in popularity in Australia, it has also become one of the more divisive celebrations.

Many people want no part of it, and reject the October 31st celebration branding it a commercialised American tradition. Whether you like it or not, seems like Halloween has come to stay in Parkes too.

Many families in the neighbourhood around Kelly Road, Billabong Crescent and Military Road have been offering trick or treating to kids for a number of years. It was the case again on Sunday night when scary creatures were seen roaming the streets and knocking on doors where there was an orange balloon on the post box to indicate who was participating.

“We just love doing this,” said Donna and Colin Monkerud who had put in a lot of trouble decorating their home and garden. Colin clapped his hands and a bat hanging above him started flapping his wings and his eyes started flashing red. “This witch comes all the way from Germany,” said Donna pointing to the one hanging above the entrance, as kids tiptoed with wide eyes past a grave on the lawn with a hand sticking out and a sign saying “Help Me”.