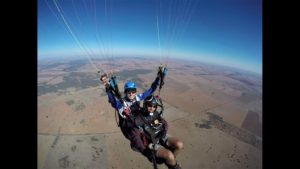 Trundle might be best known for its annual ABBA Festival, but it is expected to become synonymous with paragliding after the highly successful and first ever ground towing competition in Australia held there this week.

The Wings Out West Competition saw a total of 35 pilots took to the abundance of air space over the four-day event with Paul Kimber from NSW claiming the first place. He was followed by Dave Gibbs from Queensland and in third place was Stephen Noble from NSW. Erica Caro from New Zealand took out the women’s category.

“It was a great event for pilots new to competition, as well as a challenge for the more experienced pilots,” said organiser John Brassil.

Pilots flew over 7,000km with many setting personal records in tremendous flyingconditions. According to co-organiser Phillip Mansell from Dubbo, they were overwhelmed with how many pilots either recorded their highest, furthest or longest flight.

For many of the pilots it was their first experience of Central West NSW and doing ground tow paragliding. “Most competitions start with a foot launch from a hill,” said Phillip. “We’ve had such positive feedback that we are definitely looking into making it an annual event.”

John thanked the local community for “their unbelievable hospitality, especially the assistance from the Kelly family”. He said the dinner and bush dance hosted by the Trundle community was a highlight. “The hit dance was Winds of Trundle, a variation on the popular Waves of Bondi.”