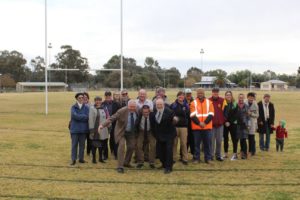 Trundle’s Berryman Park is about to get a $500,000 make-over thanks to a NSW clubGRANT funding decision that was announced this week.

The upgrade will include new seating and lighting, expanded grandstands, and the construction of an amenities block. The grant is a significant victory, allowing the improvements to be undertaken in one stage, rather than tackling the improvements on a piecemeal basis – a process that could have dragged on for years.

The Minister for Racing Paul Toole joined MLC Rick Colless in making a special visit to the shire for Tuesday’s funding announcement. Berryman Park is one of only 11 pro- jects that were funded from this round. With more than 400 applicants, it was a very tough playing field. Paul Toole said the funding will change the way the park is used and

showcase what Trundle has to offer. Understandably, the locals were thrilled with the windfall. Andrew Rawsthorne, Trundle Progress Association grants officer, said that this project will have a significant long-term benefit for the town.
Geoff Jones, Trundle Sports Council President, agreed. “Lots of things happen here, not just rugby,” he said. “We have the Abba Festival and cricket as well.”

Mayor Ken Keith said that while all the towns in the shire are wonderful, he conceded there is something special about Trundle. He extended council’s gratitude for the funding decision.

“Parkes Shire Council has a philosophy that we should spend other people’s money rather than our own if we can,” he joked.