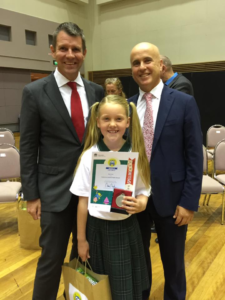 Ava Curr, daughter of Paul and Kelly Curr, was spellbound representing the Western Region in the Premier’s Spelling Bee Finals on the 9th of November at the ABC studios in Sydney. The year 4 student from Tullamore Central School was the Junior Section winner of the Regionals in Dubbo, becoming one of 43 juniors to make it to the finals. Nine yearold Ava made it to the second stage before the spell was broken.

“Ava will never leave the d out of porridge again,” her mother Kelly said. “But she found the experience exciting and fun, and didn’t stop smiling the whole time – even when they announced her word was incorrect.” Ava met ABC presenters Juanita Phillips and Stan Grant, and NSW Premier Mike Baird presented her with a prize. Whilst Ava has lost her affection for porridge, she loves ice-cream and kittens, and hopes to be an artist or actor when she grows up.