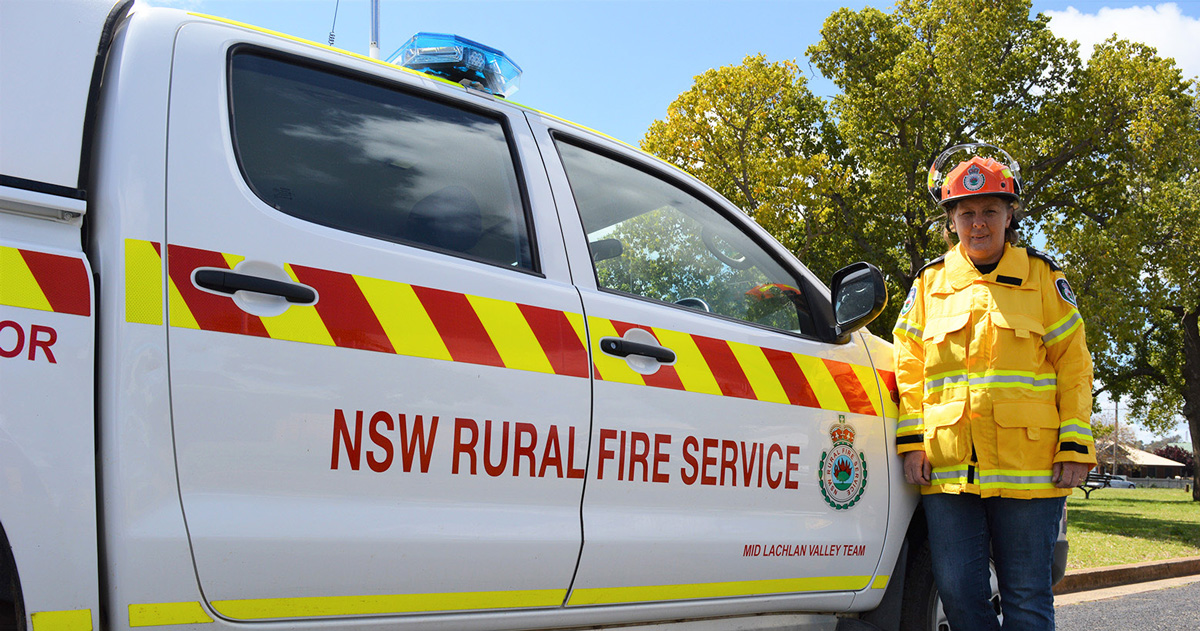 ALL FIRED UP… Vicki Williams is looking forward to the challenge of being the first female Group Captain of the Rural Fire Service Mid Lachlan Valley Team.

When her four daughters and husband joined the Rural Fire Service ten years ago Vicki Williams did not want to miss out and followed them with no real desire to be active.

It did not take long for her to learn volunteering involved a lot more than just putting out fires, and at the beginning of October she became the first female Group Captain of the Mid Lachlan Valley Team.

“I was a little shocked to get a phone call to ask me if I’d like to do it. I did have a lot of questions, but in the end I thought it would be good to gain some experience just for the year and see how I go.”

A group captain is usually elected by the brigades within the group for a period of three years. Vicki was appointed by her district manager for the final year of the previous group captain, Scott Baker’s term, as he took up employment with the RFS and could not do both roles.

Although she has been a deputy captain and captain, she feels being the first woman in the top role puts extra pressure on her.

Vicki will be responsible for five brigades and aims to focus on the role of women in the RFS by giving them a bigger voice. “Sometimes people are stuck in their ways. Women are still in the minority at 20% in the Mid Lachlan Valley Team. I would like to get more women involved.”

Vicki feels many women probably think volunteering is not for them, “but there are many more roles than just firefighting. There is a role for everybody, and it could include communication, training, community engagement, catering and many more. You don’t have to go and fight fires.”

Vicki has chosen to do it all and can still clearly remember the first fire she attended. “It was a caravan fire, and I was put on the end of the hose. It was scary, but the training that I’ve had really helped in what I did.”

The most memorable fire she fought was on deployment to the State Mine fire in the Blue Mountains in 2013 for three days. “I had a strike team leader that was more involved in firefighting so I actually ran his job in a sense. That put me up a level, but I was still there to help out at the fires. We were on a cliff and the fire was coming straight up so I had to order a helicopter to come and help us out.”

When Vicki is not working her day time job at Parkes Pharmacy, or taking on a fire fighting role, she really enjoys working with the juniors doing their training, going to championships and doing school cadets.

Vicki would also like to encourage more women to join up. “We have a role for everyone, and there is always somebody to help you.” As for how much time volunteering required, Vicki said it depended on every individual on how much they wanted to put in.

The Parkes Headquarters Brigade trains every Tuesday night, and then there is the option to go away and do training to get qualifications.

After ten years in the service, Vicki can’t imagine her life without the RFS. She sees herself volunteering forever hoping to carry on as long as their oldest member at the moment who is 74.

“We are one big family group and we really love seeing everyone thrive.”