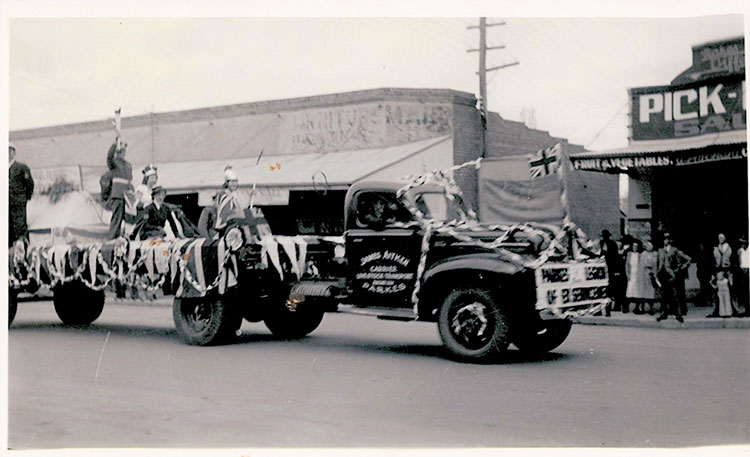 Parkes joined in the celebrations on VP Day. This decorated truck of James Aitken for the Parkes Legion of Ex-Servicemen was part of the festivities. (Photo: Parkes In Photos Of Years Gone Past Facebook page)

The 75th anniversary since the end of World War II will be celebrated at the Cooke Park Cenotaph at 11am tomorrow.

Parkes Town Crier Tim Keith will join town crier’s from around Australia and New Zealand in a simultaneous “Cry for Peace” at 11:05am. This will be the first time the Town Crier will be part of the ceremony.

These celebrations mark a significant and momentous day when Prime Minister Ben Chifley announced the unconditional surrender of Japan thus ending World War II. The 15th of August 1945 was announced as VP Day (Victory in the Pacific Day) and a two-day public holiday was declared.

Japanese Emperor Hirohito announced at 12 noon on 15th August his country’s unconditional surrender in terms of the Potsdam Declaration.

More than 1 million Australian men and women joined the armed forces out of a total population of 7 million.

Over 31,000 Australians became prisoners-of-war. More than 22,000 were captured by the Japanese, and by August 1945 over one third of them had died in the appalling conditions of the Japanese POW camps.

We commemorate the end of the World War II and remember all those who served and particularly the heroic sons and daughters of the Parkes Districts who served, suffered and died during this conflict.