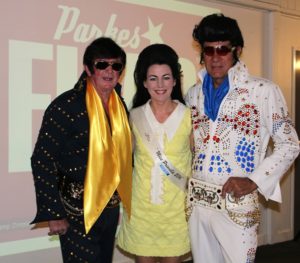 Parkes is going to be all gold and glitter for the 25th anniversary of the Viva Las Vegas Elvis Festival from 11th to 15th January next year.“It’s going to be all gold, gold, gold for the community,” said Parkes Mayor Ken Keith on Monday at the media launch of the festival. Ken said he expected 25,000 people if not more in January with an expected $15 million boost to the local economy. “January is by far the biggest tourism month for Parkes and the festival swell the coffers of businesses,” he said.

Among the invited guests on Monday were Bob and Anne Steel, who established the Parkes Elvis Festival in 1993. “Your idea has paid dividends and has evolved significantly,” the Mayor said. Cathy Treasure, new Festival Director, said the festival was going to be all silver and gold: celebrating the silver anniversary and the golden theme of Viva Las Vegas. The five-day program includes more than 120 events with festival highlights like the Ultimate Elvis Tribute Artist Contest and the Goodsell Machinery Miss Priscilla Dinner, favourites like the Northparkes Mines Street Parade, the Elvis Gospel Service that attracted 8,000 people this year, the Renewal of Vows Ceremony and new events like Viva Splash Vegas at the Parkes pool and the launch of Outback Elvis, a book on the festival.

The feature concert series, starring two renowned international Elvis tribute artists – Pete Storm from the UK and Jake Rowley from the US, will consist of four different shows. Jake is said to portray a young Elvis in every possible way from looks, voice and of course his moves. The legendary Mark Andrew will pay tribute to The King at the 25th Anniversary Gala Dinner. Digby Dig Richards, the Australian rock n roll singer, will be included in the 2017 Wall of Fame by his brother Doug Richards who lives in Parkes.

The ever-popular Elvis Express will run again, and tickets are on sale on Monday, 19th September. Cathy said people should get in early as tickets sell out in the first 20 minutes.

The festival has a competition for all tastes from look-alike fans, rock and roll dancers and buskers to poets and photographers. If you just want to enjoy the sights and sounds, the Cooke Park main stage will have non-stop free entertainment, Clarinda Street will be closed and turned into Festival Boulevard with the buildings lit up at night, there will be cooling stations and Elvis Central will open for information and shopping.

According to Cathy the biggest challenge of organising the festival is visitors’ services. “Phone calls have doubled from last year.” She said shuttle buses would run from Forbes and Orange for festivalgoers finding accommodation outside Parkes. So get your golden outfit ready to Viva Las Vegas in January!