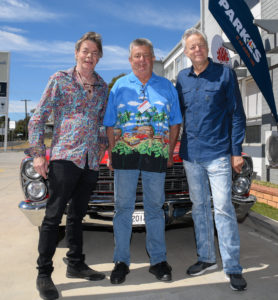 The Emmanuel brothers hold a special place in the hearts of many Parkes residents. With more than 50 albums to their name and plenty of other accolades, the decision to induct the Australian rock legends Phil and Tommy Emmanuel to the Wall of Fame was welcomed by many locals, especially those who went to school with them.

The Henry Parkes Museum has a dedicated display of the Emmanuel family and their time in Parkes. Music was constantly played in the Emmanuel household and encouraged by Father Hugh and Mother Virginia with their six children Chris, Virginia, Phil, Tommy, Veronica and Darcy.

The formation of The Midget Surfaries enabled the family to stay together touring with father Hugh handling the bookings of the band, often driving ahead. Touring stopped after six years when Hugh died in 1966. The family returned to Gunnedah and ended up in Parkes in 1967.

In Parkes the brothers founded The Trailblazers when they were at Parkes High School with the encouragement of the music teacher and performed all over the local area. While they both built successful solo careers after school playing with many notable artists like Chet Atkins, Eric Clapton and Air Supply, they also toured Australia together and played sell out concerts in every city.

At the 2000 Sydney Olympics the pair performed to a worldwide audience of 4.5 billion at the closing ceremony with INXS, Vanessa Amorosi, Savage Garden and Midnight Oil. “We still have wonderful friends here, Parkes is a very important part of our lives,” said Tommy.

The special display at the Henry Parkes Museum on the Emmanuel family is worth a visit with many family photos and posters documenting the family’s involvement in music, as well as many other interesting pieces. The exhibition featured in the 2017 Heritage Week celebrating 50 years of the Emmanuel family in Parkes.